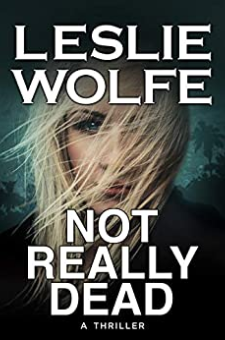 One number, one letter: 3D. Two characters, nine cuts, their edges always crossing, carved sharply into Danielle’s bleeding flesh. She’d seen it before. On his other victims’ bodies. “Wow. I think I just fell head over heels in love with a fictional character. Tess Winnett is one of the smartest FBI agents and profilers I have come across yet and with analytical skills to rival Sherlock Holmes. Hats off to Leslie Wolfe for easily the best thriller I have read in this genre for many, many years!” – Manie Kilianon, five stars review on Amazon. The crimes: horrifyingAfter a high-profile victim survives a brutal attack in her own home, FBI Special Agent Tess Winnett accepts to handle the investigation off-book. With every question she asks, the truth unveiled poses more questions but leads to only one possible conclusion: The Word Killer is back. The evidence: disturbing The Word Killer has emerged after years of absence, more blood-thirsty and vicious than ever. Yet his identity remains hidden, a mystery figure among the city’s millions, despite DNA evidence left at each crime scene. An impulsive murderer, disorganized and lightning-fast, fuelled by an all-consuming rage that cannot be quenched. The worst kind of killer there is. Then why did his latest victim survive? Why was Danielle still alive? The memories: agonizingA strong sense of deja-vu brings unwanted memories from a buried past Tess never wanted to relive. But if she wants to save the lives at stake when the killer’s latest deadline expires, she has to embrace who she has once been: the victim, the survivor, the fighter. If she makes one mistake, lives will be lost. If she doesn’t see him coming, lives will be lost. And the blood will be on her hands. The best-selling author of The Watson Girl is back with another suspenseful, gripping crime thriller. If you’re a fan of David Baldacci, Melinda Leigh, and James Patterson, you will enjoy Leslie Wolfe’s enthralling police procedural that will keep you reading until dawn. What Readers and Reviewers Are Saying About Leslie Wolfe“Wolfe's strong female characters, who all appear to be flawed, never disappoint. ” “The action is immediate and nonstop, and just when you think you have it all figured out, Wolfe tosses in a twist so masterful that it’ll make your head spin. ” “Wow... Leslie Wolfe is an incredible storyteller. Can't wait for more of Agent Tess Winnett.” “Leslie Wolfe has a wonderful ability to make you feel as if you were right there watching the events unfold in this fast paced and nail-biting thriller.”