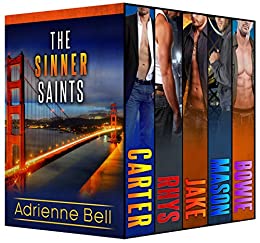 The men of Macmillan Security are waiting...are you ready?

The men of Macmillan Security have seen it all and done it all..but they have no idea how difficult--or dangerous--a case can be until they meet the women who challenge their hearts.

The bestselling Sinner Saints series available in one complete set!

CARTER
After years of heading an elite Special Forces unit, nothing ever gets past Carter Macmillan…until the night slick-talking reporter, Ally Weaver, gives him the slip.

RHYS
No one understands secrets like Rhys Vaughn. Known for his cold efficiency, he’s notorious for having been the best Special Forces interrogator in the field. There’s no one he can’t break…until Rhys comes face to face with injured scientist, Tessa Rosenthal, the only person who has ever managed to see past his frigid shell.

JAKE
Ex-Special Forces operative Jake Thorne has never backed down from a fight…not until the day that a momentary lapse of judgment led to tragedy. Since then he’s been hiding at the bottom of a bottle, far away from the pity of those closest to him. But all that changes the night a beautiful stranger crashes his lonely roadhouse booth pleading for his help.

MASON
After a wildly successful career in Special Forces, Mason Wright has come to believe that there is no puzzle he can’t solve, no problem he can’t fix, no person he can’t charm. But all that changes the day he’s assigned the task of stopping suspected cat burglar Sara Baumgartner from stealing one of the world’s most famous diamonds.

BOWIE
Bowie Tamatoa is used to flying solo. After an infamous Special Forces career, he’s far more comfortable keeping his emotions under wraps and letting his fists do the talking. But every fortress has a weak spot, and Bowie is no different. 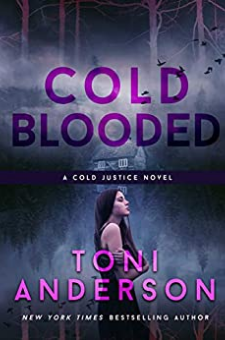 "With Cold Blooded, the talented Toni Anderson has penned yet another nail-biter. From beginning to end, the pages sizzle with thrilling suspense and romantic tension.” —Melinda Leigh, Wall Street Journal bestselling author.

A journalist searching for the truth about her best friend’s death—and the FBI agent who needs her to stop.

Disgraced investigative journalist Pip West is devastated when she discovers her best friend’s body face-down in a tranquil lake. When cops and federal agents determine that her friend overdosed then drowned, Pip knows they’re mistaken and intends to prove it.

Special Agent Hunt Kincaid doesn’t trust journalists and has no patience for Pip’s delusions, especially since her actions could expose why the FBI is so interested in her friend’s final days. The dead scientist worked at the cutting edge of vaccine research and may have a connection to a new, weaponized, vaccine-resistant anthrax strain that just hit the blackmarket.

The more Pip digs, the closer she gets to both the intriguing FBI agent, and to a bioweapons terrorist who’s more than willing to cold-bloodedly sacrifice anyone who gets in his way. 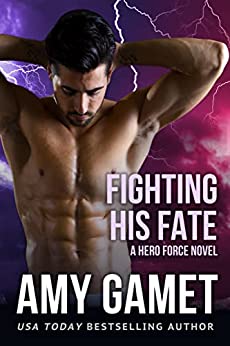 He has no business taking care of one child, no less two…When HERO Force member and former Navy SEAL Brett Champion’s cousin and friend are killed in a hit-and-run accident, Brett’s asked to step in and take care of the couple’s orphaned twin infants until the real next of kin can be located.Nurse Grace Bryant has lived next door to Brett for years, allowing her to see firsthand his playboy lifestyle and careless ways. Thank God she has a good man of her own—a minister she suspects is about to pop the question. Grace is on-call when the babies are brought to the ER, and she spends the night caring for the twins, concerned for their future.

Grace is horrified when Brett is named their temporary guardian. Desperate to protect the twins, she agrees to stay with Brett and care for the infants herself. But it quickly becomes apparent the parents’ deaths were no accident, and the twins were the intended target. Sparks fly between Brett and Grace as they race to discover the deadly truth behind the babies’ conception, the evil forces that are out to get them, and the surprising identity of their biological father. Read more 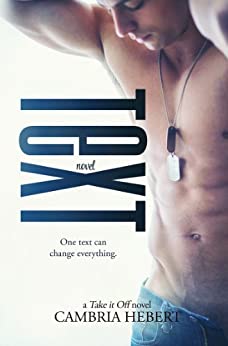 ***This is a new adult contemporary novel and contains sexual content and graphic language. It is not intended for young adult readers.***

One text can change everything.
Honor Calhoun never thought her life would ever be like the books she writes for a living. One morning while out for a run, she learns not all bad things are plots in novels. Some horrors can actually come true.
She faces off with a persistent attacker, holds her own, but in the end is taken hostage and thrown into a hole. In the middle of the woods.
But Honor didn’t go down there alone.
She took her kidnapper’s phone with her. With a spotty signal and a dying battery, her hope is slim.
Nathan Reed is an active duty Marine stationed at a small reserve base in Pennsylvania. All he wants is a calm and uneventful duty station where he can forget the memories of his time in a war-torn country.
But a single text changes everything.
Nathan becomes Honor’s only hope for survival, and he has to go against the clock, push aside his past, and take on a mission for a girl he’s never met.
Both of them want freedom… but they have to survive long enough to obtain it.
Read more 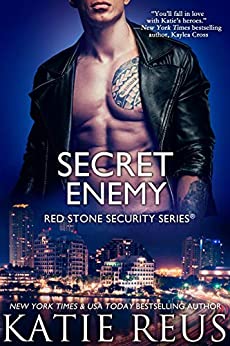 He thinks she’s out of his league.

Lyosha Vasiliev met Mila by chance, and now she’s all he thinks about. But the two couldn’t be more different, so Lyosha won’t go there. As a security expert, he skirts the law on the regular. Unlike Mila, the newest employee at Red Stone Security, who spends her free time volunteering at an animal shelter. Despite his determination to stay away from her, when it becomes clear his past has come back to haunt him—and poses a threat to her—Lyosha immediately steps in. And he’ll cross any line to keep her safe.

But he can’t seem to walk away.

Mila met Lyosha when he brought in a half-starved stray cat to the shelter she volunteers at. He tries to act tough—and okay, he is. He should be the last man she wants, but she loves his sexy tattoos, gruff demeanor, and that he has a marshmallow inside that only she gets to see. When someone threatens her, he’s convinced it’s linked to his past. He’s made it clear that he’ll protect her with his life—but he won’t give her his heart. Not when he blames himself for bringing danger to her doorstep. Except Mila isn’t the kind of woman who walks away from what she wants. And Lyosha finds himself unwilling to let her go without a fight.

Red Stone Security Series, #16
Author note: all books in this series may be read as stand-alones, complete with HEA. Read more 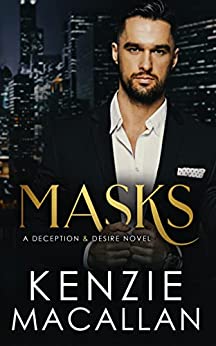 She’s investigating him. He’s accused of fraud. Will a sinister conspiracy ruin their shot at unforgettable love?New York City. Fiery artist Raquelle Luccenzo craved her father’s approval of her work. So, after his murder, she’s determined to find out what happened. But when the clues lead to a suspicious CEO, painting his portrait could be the key to cracking the case…if she can keep her hands off the sexy exec.Michael Raines is supposed to be taking over control of the company. But his overbearing father simply won’t let go of the helm. And the irresistible beauty commissioned to immortalize him is threatening to blur the lines between work and pleasure.After the shocking discovery of her family’s criminal history, Raquelle is torn between her mission and her desire. And when the sins of his father land at the firm’s doorstep, Michael’s pulled into a fight to survive government prosecution.Will Raquelle and Michael find their way to true love, or will their parents’ corruption destroy their lives?Masks is the riveting third novel in the Deception & Desire romantic suspense series. If you like life-changing secrets, undeniable attractions, and complex conspiracies, then you’ll adore Kenzie Macallan’s sultry tale.Buy Masks to uncover passion’s portrait today!*This book can be read as a stand-alone. Read more