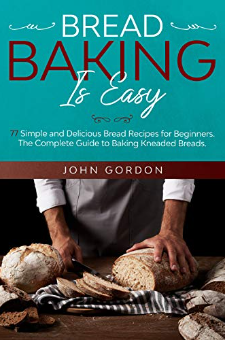 Do you love the smell and taste of home baked breads?Would you like to be able to create fresh and delicious bread every day of the week?This book has recipes for every occasion!There is nothing quite like the taste of homemade bread and once you smell the aroma in your home there is no mistaking it. From royalty and wealthy nobles to impoverished peasants, feasts to everyday meals, bread has been eaten through the ages. And it continues to form a large part of our diets today, with hundreds of different varieties stemming from every corner of the globe.This book, Bread Baking is Easy: 77 Simple and Delicious Bread Recipes for Beginners – The Complete Guide to Baking Kneaded Breads, will help get you started by baking some simple breads that are no less tasty, with recipes for:Simple homemade breadSourdough cornbreadItalian bread with olives and fried onionsSesame breadWhole grain bread with black caraway seedsFocacciaBanana bread with oat milkSweet bread with nuts and raisinsAnd many more…Complete with 77 recipes that each have step by step instructions and full colour photos, information on the health benefits of certain breads, bread making terminology, how to choose the right flour, kneading and storing bread, Bread Baking is Easy is the perfect book even if you are a complete beginner.There’s no doubt that a home baked bread is better for you, tastier and healthier than anything you could buy in a shop and it’s no wonder that many now want to produce it for themselves.Scroll up and click Add to Cart for your copy and start making delicious breads in your kitchen today!                                                                                        ????????????Attention!! Available as:Kindle eBook Paperback black and whitePaperback full colorTo choose the desired version press «See all 3 formats and editions.»You will notice the color copy is more expensive. 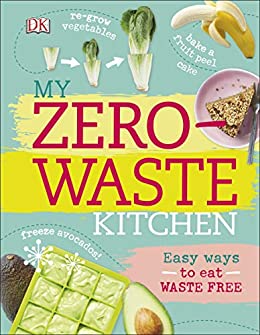 Learn how to reduce food waste with quick tips and simple solutions in My Zero-waste Kitchen.Live sustainably and embrace the three R's: reduce, reuse, and recycle. In My Zero-waste Kitchen, find creative and unexpected ways to eliminate trash, save money, and give leftovers a new life. Plus, learn to grow your own vegetables and herbs from scraps, and nourish your plants with compost.With 15 nutritious and versatile recipes in which nothing goes to waste, this guide shares the secrets to smart shopping, meal planning, and the nutritional value of often-discarded food products. Turn beetroot peelings into delicious falafel, pesto, or a melt-in-your-mouth cake. Revive produce nearing the end of its shelf life with "flexi" recipes-for risotto, stir-fry, smoothies, and more.The tips and tricks in My Zero-waste Kitchen show how easy it is to live more sustainably without making a complete lifestyle change. 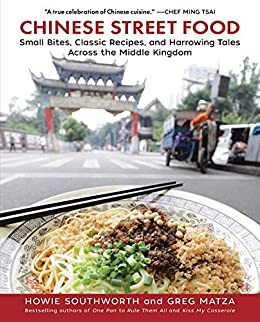 "Chinese Street Food is brimming with history, food lore, and recipes that take you on a culinary journey outside of the restaurant and into the streets of regional China. Authentic flavors and techniques explode onto the page in a way that first make you salivate, then motivate to roll up your sleeves and get cooking." —Chef Lee Anne Wong One element of Chinese cookery that remains rare throughout the Western world is the most popular style of cuisine across China: street food! Every day, nearly one-fifth of humanity sustains itself on conveniently placed bites and cheap alfresco meals. In China, one’s home is often small, kitchens are cramped, and time is short. So, a walkable nosh on the way to the office, a quick, cheap lunch, or an evening spent hopping from snack stand to snack stand with friends is an everyday occurrence. Howie Southworth and Greg Matza, best friends and bestselling food authors, have been eating their way through China for over two decades. Soon after their yearly culinary journeys began, they were struck with a delicious addiction: street food! Within this entertainingly narrated cookbook, our dynamic eating duo not only fondly recalls highlights of their fascination with China’s incredible food culture, but they artfully weave in folklore, origin stories, and witty chats with the cooks, vendors, and fellow gastronomes they’ve met along the way. Photographed entirely in China, this book beautifully presents small plates from the balmy rice paddies of Yunnan and spicy streets of Sichuan to the frozen tundra of Harbin and the imperial majesty of Beijing. This tale of two foodies is destined to change the way readers view going out for Chinese. 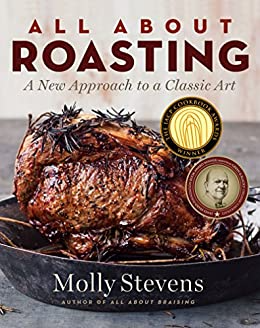 Winner of the James Beard Foundation Award for Best Single Subject CookbookWinner of the IACP Award for Best Single Subject Cookbook and Best General CookbookA master teacher provides delicious recipes and explains the principles behind the essential technique of roasting.Successful restaurateurs have always known that adding "roasted" to a dish guarantees immediate appeal. Molly Stevens brings her trademark thoroughness and eye for detail to the technique of roasting. She breaks down when to use high heat, moderate heat, or low heat to produce juicy, well-seared meats, caramelized drippings, and concentrated flavors. Her 150 recipes feature the full range of dishes from beef, lamb, pork, and poultry to seafood and vegetables. Showstoppers include porchetta ingeniously made with a loin of pork, a roast goose with potato-sage stuffing, and a one-hour beef rib roast-dishes we've dreamed of making, and that Molly makes possible with her precise and encouraging instructions. Other recipes such as a Sunday supper roast chicken, herb-roasted shrimp, and blasted broccoli make this an indispensable book for home cooks and chefs. All About Roasting is like having the best teacher in America in the kitchen with you. 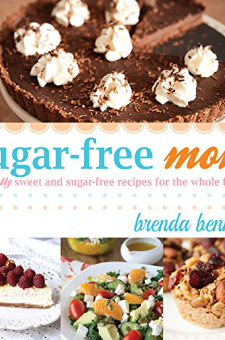 Sugar-free no longer equals taste-free!Discover how easy it is to go eliminate refined sugar from your diet, without giving up any of your favorite snacks and treats! You'll learn how to use natural sweeteners like honey and coconut sugar to create delicious, wholesome recipes that satisfy even the pickiest eaters.You’ll learn how to makeGrain-Free Chocolate Glazed DonutsCrock Pot Pulled PorkChurn-Free Vanilla Ice CreamChocolate Fudge TartsImpress friends and family with tasty treats that are completely sugar-free. Take cupcakes to your daughter's soccer game or lemon bars to the neighborhood bake sale. Nobody will believe they don't contain any cane sugar!Feed your family the foods they love, all while boosting your immune system, losing weight, and maintaining amazing energy levels! 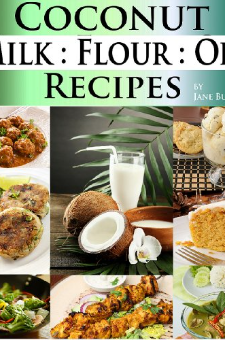 If you are looking for a book filled with coconut milk recipes, coconut flour recipes and coconut oil recipes you will be delighted with this recipe book. It has over 40 delicious, healthy recipes that are all accompanied by pictures of the finished product. These all fit right in perfectly for people eating Paleo foods.Coconut milk, coconut flour and coconut oil recipes are amongst the most popular choices for anyone on the Paleo diet and anyone wanting gluten free and dairy free recipe ideas. The book is full of breakfast, lunch and dinner recipes including sweet and savory dishes, curries, cakes, ice cream, spreads, smoothies and many more.Coconut is a healthy alternative to traditional dairy and wheat products. Coconut milk is a healthy substitute for cow's milk and other associated dairy products. People with particular allergies turn to better options for health reasons, sometimes just for weight loss alone. There are many different uses and benefits of coconut oil, so that is covered too. While the recipes in this book feature food recipes, it does go into benefits and tips for using coconut products for other things. Uses include tips for hair and skin. We also talk about the health benefits and beauty tips. The uses are wide and varied! I hope you enjoy these coconut milk recipes as much as I do. Asian cooking often uses coconut milk and these are amongst my favorite meals. Enjoy!