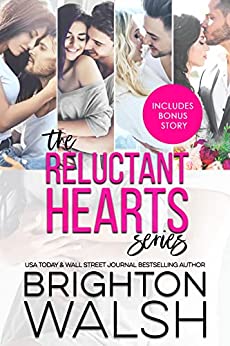 From award-winning USA Today and Wall Street Journal bestselling author Brighton Walsh comes the complete Reluctant Hearts series, including a bonus story, featuring strong-willed heroines and the heroes who fall head over heels for them. This never before been bundled collection includes trope favorites such as opposites attract, friends to lovers, single mom, brother's best friend, and enemies to lovers. Dive into these five steamy reads now!Caged in Winter
Winter Jacobson doesn't have room in her life for a man. She's fought hard to get as far away as possible from the rubble she was born in to, and she's so close she can taste it. She doesn't have time for distractions, certainly not when they come in the form of a 6'4" wannabe Prince Charming.Tessa Ever After
No one's off-limits for this playboy...except his best friend's little sister. Jason's the very definition of trouble, but Tessa can't get him out of her mind...or her bed. And every day she spends by his side only serves to keep her from the one thing she wants more than anything—a happily ever after.

Mine for Tonight (a bonus story)
Paige Bennett thought all she had in store for the night was some girl time with her besties, but when they bail early—on her and on the evening—she catches a ride home with the one guy she knows she shouldn’t want. And if that isn’t bad enough, she invites him in for a whole different kind of ride.Paige in Progress
She's the beautiful but aloof girl next door. He's a mistake that's come back to bite her. What happens when the best one-night stand you've ever had becomes your new neighbor?Our Love Unhinged
When her knight in shining armor pops the question, she says yes. Of course she does. But two years isn’t long in the grand scheme of things, and certainly not enough time to erase the memories of the past. Sometimes, even the greatest love can’t silence fears. Read more 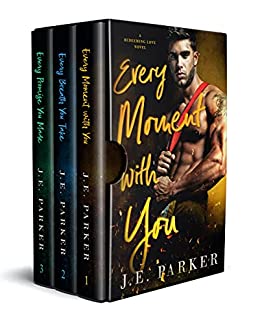 Book One: Every Moment with You

Hendrix promised to love Maddie forever...
But then he walked away, destroying them both.

Will true love prevail?
Or will their past prove too much to overcome?

Book Two: Every Breath You Take

Shelby is sassy single mom running from a dark past...
Anthony is a hardened homicide detective.

Both are looking for fresh starts.

Can they become one another's salvation?
Or will their demons prove too much to conquer?

Book Three: Every Promise You Made

She was his best friend's little sister...
He was the boy who'd always protected her.

In the blink of an eye, fate tore them apart.

Can Evan and Hope find their way back to one another?
Or will their love be lost forever? Read more 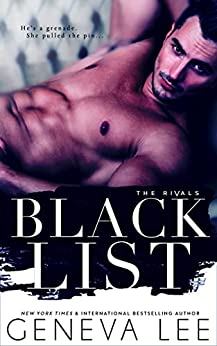 Sexy, addictive, and the perfect summer read..." - K. Bromberg, New York Times bestselling authorAdair MacLaine was sunshine and the storm. Emerald-green eyes and attitude, I fell for her the moment we met and hated her just as quickly. Five years ago, tragedy brought her to my door and sparked a love that consumed us like wildfire—hot, unpredictable, and impossible to control. We raged together until her father made her choose between me and the family name.I left. She stayed.I’m no longer the poor kid that lost her. I’ve made myself into a man that won’t be ignored.Now her father is dead, the MacLaine empire is crumbling, and Adair’s inheritance depends on the company’s largest investor: me.♥ ♥ ♥ ♥ ♥My whole life changed the night I met Sterling Ford. Brilliant and intense, he came to Valmont with nothing but a scholarship and a chip on his shoulder. He was a grenade and I wanted to pull the pin.We were doomed from the first kiss.I’ve waited for my chance to seize my freedom and now it's finally in reach—until the last person I ever wanted to see again walks into my father’s funeral: him. 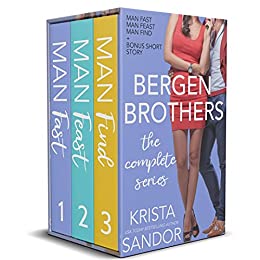 The Billionaire Bergen Brothers Complete Series (Books 1-3) + An Exclusive BONUS Short Story only found here! Brennen, Jasper, and Camden Bergen aren’t your average brothers.Heirs to a billion-dollar mountain sports empire, these smoking-hot siblings are each about to meet their match when it comes to the game of love.In the BERGEN BROTHERS COMPLETE SERIES you get:Three Full-length Books + A BONUS Short Story—Only Available Here!Three Chances to Laugh, Sigh, and Swoon.Three Happily Ever Afters with Mountains, Money, and all the Romance.One Exclusive BONUS Short Story: Elle and Jasper's AdventureTHE BOOKS:MAN FASTA Man Fast is the complete abstinence of all things male. No dating. No boyfriend. And no creep to break your heart. Too bad the city’s biggest player sees it as a challenge.MAN FEASTA man feast is what happens when two workaholics agree to a no-strings fling. But this fire and ice couple who clash at every turn soon come to learn that there’s a fine line between love and hate.MAN FINDA man find is a great guy you found online. The problem…you can’t find him in real life. Or can you?Only Available Here: ELLE AND JASPER’S ADVENTUREA Bergen Brothers Bonus Short Story featuring all the characters you love—and a Bergen-licious adventure for two of your favorites! Read more 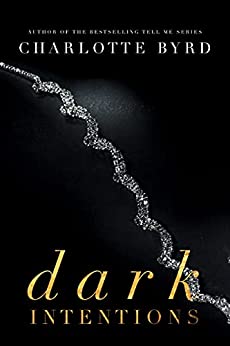 One debt. One secret. One night.
I have a secret and I'll do everything in my power to keep it that way.
I've been watching her for a long time.
I've been following her.
She's lost a brother. I lost a best friend, but no one could ever know.
She's in pain, and so am I.
She deserves so much better than me. I am rotten to the core and if I take this any further, I will pull her into my darkness.
But I can't stay away. I can't stop.
What happens when she starts to uncover my lies? What happens if love isn't enough?

From bestselling author Charlotte Byrd comes an intense forbidden mafia romance about debts, lies and secrets and the extent to which people go for love.

He gives me chills and makes my body ache. He makes my pain go away. He's just a distraction, but I can't get enough of him.

Dark Intentions is the first novel in the Dark Intentions series. It is a dark romance/romantic suspense about debt, lies, wealth, crime and family bonds. There is no cheating.

⭐⭐⭐⭐⭐ "Must read! Its a dark and intense book, I love it. Cant wait for the next book. Charlotte Byrd you are amazing and I'm so happy I discovered your books." (Goodreads review)

⭐⭐⭐⭐⭐ "On the edge of my seat! The rush of words making one's heartbeat faster with every word. Holding on to the edge wanting to see the out come. These words will make you hold your breath and wish you could keep reading. Amazing!!" (Goodreads review)

⭐⭐⭐⭐⭐ "The story was well developed and well written. I loved the characters and the way their stories unfolded. With the underlying drama, I had trouble putting the book down and I read it in a single sitting. I look forward to reading more by this author." (Goodreads review) Read more

The Oh Hell No Boxed Set 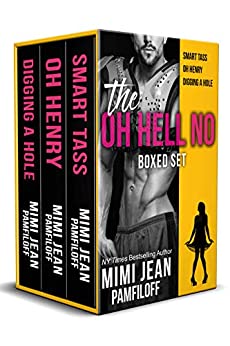 BOOK #1: SMART TASS
He’s the hot college quarterback all the girls want.
She’s the smart girl he loves to pick on.
And now that they’re all grown up, things are about to get geekin’ ugly…

My name is Tass. I’m smart, I’m driven, and I am determined not to let prankster Hunter Johnson continue raining on my parade. When we were little, he’d pull my hair and call me names. When we were teenagers, he’d throw food and tease me for being a flat-chested virgin.

But now that we’ve ended up at the same college, he’s out of his hot head if he thinks he can keep messing with my life. It’s like he’s fixated on me or something. Well, guess what, Mr. Amazefootball? I’m not that geeky little girl anymore and you do not screw with a smart woman.

So what’s my plan?

It’s definitely wild, and he’s about to find out…

BOOK 2: OH, HENRY
She’s got me by the footballs…

My name is Henry Walton, and though I’ve been called many things throughout my life—tree trunk, moose, walrus—I am now six foot five, solid muscle, and the hottest defensive end in the NFL college draft. This is the moment I’ve been waiting for: fame, women, and glory.

Just one problem: I’m suddenly in a bad slump. And it started the moment I got dumped by Elle, the nerdy goddess with thick glasses, a smokin’ hot body, and a genius IQ.

So what gives? We only dated for a few weeks, and it’s not like I’ve missed her. (Much.) Regardless, all the facts point to one conclusion. Elle is my lucky nerd-charm.

So call me superstitious, but I have to get her back before I lose everything. Even if she’s the last girl I really want and she now hates my guts. Play ball?

BOOK 3: DIGGING A HOLE
He’s the meanest boss ever.
She’s the sweet shy intern.
They’re about to wreck each other crazy.

My name is Sydney Lucas. I am smart, deathly shy, and one-hundred percent determined to make my own way in the world. Which is why I jumped at the chance to intern for Mr. Nick Brooks despite his reputation. After ten failed interviews at other companies, he was the only one offering. Plus, everyone says he knows his stuff and surely a man as stunningly handsome as him can’t be “the devil incarnate,” right? Wrong.

Oh…that man. That freakin’ man has got to go! I’ve been on the job one week, and he’s insulted my mother, wardrobe shamed me, and managed to make me cry. Twice. Underneath that stone-cold, beautiful face is the evilest human being ever.

But I’m not going to quit. Oh no. For once in my life, I’ve got to make a stand. Only every time I open my mouth, I can’t quite seem to muster the courage. Perhaps my revenge needs to come in another form: destroying him quietly.

Because I’ve got a secret. I’m not really just an intern, and Sydney Lucas isn’t my real name. Read more