To Madden a Marquess 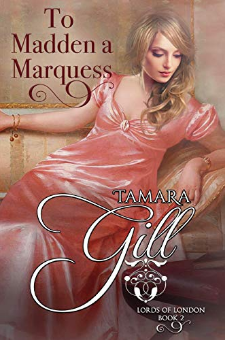 She saved his life, but can she save him from himself?Hunter, Marquess of Aaron, has the ton fooled. Outwardly he’s a gentleman of position, with good contacts, wealth and charm. Inwardly, he’s a mess. His vice—drinking himself into a stupor most days—almost kills him when he steps in front of a hackney cab. His saviour, a most unlikely person, is an angel to gaze at, but with a tongue sharper than his sword cane.Cecilia Smith dislikes idleness and waste. Had she been born male, she would already be working for her father’s law firm. So, on a day when she was late for an important meeting at one of her many charities, she was not impressed by having to step in and save a foxed gentleman rogue from being run over.When their social spheres collide, Hunter is both surprised and awed by the capable, beautiful Miss Smith. Cecilia, on the other hand, is left confused and not a little worried by her assumptions about the Marquess and his demons. It is anyone’s guess whether these two people from different worlds can form one of their own…