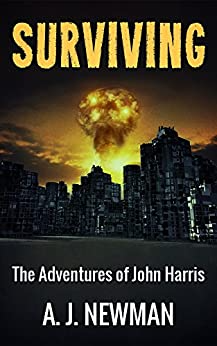 Surviving Book I: The Adventures of John Harris - a Post - Apocalyptic Survival novel.John Harris is an ex-Special Forces soldier, survival expert and serious prepper, believing that one day the world as he knows it will cease to exist. When he and a group of friends stumble upon a drug-running operation with ties to rogue US Government officials while on a hunting trip. John saves a woman whom the cartel tried to kill, and they quickly form a bond.But drug-running cartels are the least of John’s worries when his worst fears are realized. A group of rogue government officials conspires with America’s enemies, and the nukes begin to fall..With city after city destroyed in the fires of a nuclear holocaust, John leads his small group in a bid to save as many people as he can. But while they are able to prevent one nuke from devastating a major US city, they are powerless to stop society’s inevitable slide into chaos..As electricity, food, and water begin to run out, the country descends into anarchy with looting, rioting and gang violence becoming the new order. With lawlessness rife and gangs of thugs taking over the remaining cities, John’s team must fight for survival in a world gone mad, against multiple threats..The odds are long indeed, but that was always how John liked them.