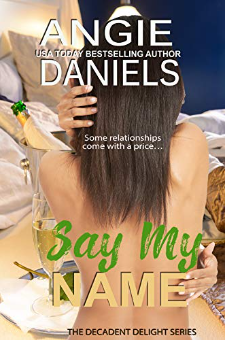 The award-winning author of A Delight Before Christmas brings readers a delightfully erotic romance that will kick off the Decadent Delight Series.Can you Put a Price Tag…On Love?St. Louis caterer Christina Holloway only dates men capable of providing her with the finer things in life. But despite putting her best foot forward, her relationships have all ended in disappointment. It isn’t until she attends her sister’s wedding that she begins to wonder if maybe it’s time to reevaluate her choice in men. Her cousin agrees, and offers a challenge: if she lowers her standards and dates a man with a more humble career, a butcher, a baker, even a candlestick maker, for five consecutive dates, she’ll give Christina the priceless family heirloom she so craves. From the moment she meets Dereon Sanders, Christina is attracted to the sexy bad boy in ways she can’t explain. With one touch, Dereon has the ability to make her forget who she is, and the material things that were once so important no longer seem to matter. What was supposed to have been only five dates develops into an insatiable relationship with a man who challenges everything she was raised to believe was important. Christina’s all set to prove to her family that she and Dereon are meant to be together. But there’s one problem—Dereon is hiding something. Uncovering the truth will require Christina to put her creative skills to use…"She has a knack for bringing to the forefront heroines that are sassy and independent." RT Book Review on Time is of the EssenceAngie Daniels has released over twenty-three novels. She has won numerous awards including a Romantic Times Reviewers’ Choice Award for When it Rains, and an Emma Award for Favorite Erotic Romance for A Delight Before Christmas. She began her road to publication in 2001 when she was offered a four-book deal with Genesis Press. In 2002 she signed with Arabesque which was purchased by Harlequin/Kimani Romance in 2005. Angie joined Kensington Publishing in 2003. She has a Bachelor's degree in Business Administration from Columbia College.