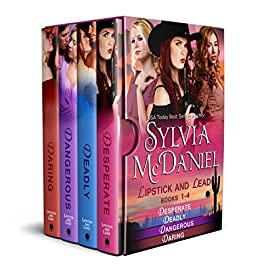 Lipstick and Lead Series Books 1-4
Forced to become bounty hunters. These girls always get their man!
The McKenzie sisters, Meg, Annabelle, and Ruby find themselves orphaned, alone and about to lose the homestead. See the three women's journey's as they use their weapons and wiles to find love, happiness and discover family is all that matters. Desperate
In 1880 Zenith, Texas, the McKenzie sisters, Meg, Annabelle and Ruby must find a way to support themselves after the death of their father. They have three options; marriage, women's work or... following in their papa's footsteps.Deadly
Second Chances at Love Can Be DeadlyHeavily burdened with the responsibility of her sisters and her homestead, Meg McKenzie must dress in men's clothing and take on a job as a bounty hunter. One last captured outlaw will pay off the farm, leaving her free to pursue her dream of becoming a dressmaker. Once again, the man who refused her marriage proposal, the Sheriff of Zenith, stands in her way.In the small Texas town of Zenith, only Meg McKenzie could expose Sheriff Zach Gillespie and leave him vulnerable, naked and tied up. To keep her from getting too close to the truth, he must outmaneuver the bounty hunter and guard his secret. Forced to make a difficult decision will Zach choose Meg, or betray a misguided loyalty. Can two stubborn people forgive and find happiness?Dangerous
The Hunt of a Lifetime Becomes a Journey of the HeartAnnabelle McKenzie is bored of taking care of the farm while her sisters chase criminals. Longing for adventure, when an opportunity bumps into her at the bank, she recklessly follows her prey out of town. Only she soon realizes she's chosen the wrong man to hunt.Beau Samuels has a dark secret that goes beyond the price on his head. And now there's a wanted poster with his face plastered in every small Texas sheriff's office. As if things couldn't get any worse, now he has a novice in a skirt brandishing a gun and determined to collect his reward. Could he get away from the spitfire with his heart intact?When Annabelle unlocks the secrets to his heart and reveals the true man behind the wanted poster, can she lay aside her scruples and allow herself to love an outlaw?Daring
Sometimes the Past Refuses to Stay in the Past
Bounty hunter, Ruby McKenzie loves using her beauty and wiles to chase bad guys and bring them to justice. Her married sisters refuse to allow her to pursue criminals alone, so Ruby takes her greenhorn cousin  Caroline out on a hunt, where they stumble upon the cowboy who rejected Ruby. Deke Culver, the only man who ever resisted her charm.Deke Culver is shocked when Ruby, the woman he dreams of, rides into his camp and steals his outlaw. After her bumbling cousin, Caroline shoots a bank robber, Deke convinces Ruby for them to go alone after her father's killer. Unprepared for the unfulfilled feelings that are reawakened, Deke tries to keep the beauty at bay. Secrets from the past haunt him and keep him from committing to a woman. Can Ruby heal his wounded heart or will skeletons from the past keep him prisoner? The Bounty Hunter sisters. They always get their man.