Dancing with the Lion 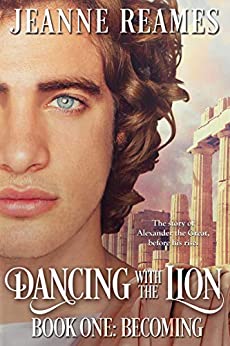 Two boys, one heroic bond, and the molding of Greece’s greatest son.

Before he became known as Alexander the Great, he was Alexandros, the teenage son of the king of Makedon. Rather than living a life of luxury, as prince he has to be better and learn faster than his peers, tackling problems without any help. One such problem involves his increasingly complicated feelings for his new companion, Hephaistion.

When Alexandros and Hephaistion go to study under the philosopher Aristoteles, their evolving relationship becomes even harder to navigate. Strength, competition, and status define one’s fate in their world—a world that seems to have little room for the tenderness growing between them.

Alexandros is expected to command, not to crave the warmth of friendship with an equal. In a kingdom where his shrewd mother and sister are deemed inferior for their sex, and his love for Hephaistion could be seen as submission to an older boy, Alexandros longs to be a human being when everyone but Hephaistion just wants him to be a king.