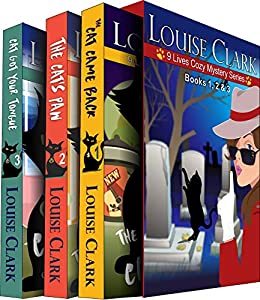 Join Stormy the Cat Along With Christie Jamieson and Quinn Armstrong on Their First Three Mysteries in Vancouver, British Columbia

BOOK 1: The Cat Came Back - Young mother Christy Jamieson just learned her husband, Frank, embezzled his trust fund, sold their Vancouver mansion, and ran off with a socialite. Worse, Frank's trustees are telling Christy to let them handle it. But they aren't doing anything, and Frank's enemies are coming after her and her daughter. Desperate to find Frank and fend off his enemies, Christy asks Quinn for help. His price: the dirt on Frank. But the closer Christy and Quinn get to the dangerous truth, the more convinced they become that only the one who knows where Frank is at, is Stormy the Cat.

BOOK 2: The Cat's Paw - Christy Jamieson has just confronted the person who murdered her husband Frank, when Frank's wealthy Aunt Ellen arrives unexpectedly, suitcase in-hand. Ellen's home has become a crime scene and she intends to stay with Christy. No one is happy, but the most furious member of the Jamieson household is Stormy the Cat. Wanting the woman out of her hair, Christy investigates with journalist-friend Quinn, only to discover the body on Aunt Ellen's terrace was the woman who alibied the person complicit in Frank's murder. But the deeper Christy and Quinn dig into the connection between the dead woman and Aunt Ellen, the clearer it becomes that the only one who can unravel the truth is Stormy the Cat.

BOOK 3: Cat Got Your Tongue - When the rock concert Christy and Quinn are enjoying ends in a murder, the sleuthing couple are pulled into the case. Hot on the trail of a primary suspect, they discover the band's manager has also been found dead. Are the two murders connected, or are there two killers? Unfortunately, the only eye-witness--Stormy the Cat--is holding his tongue.

Publisher Note: The 9 Lives Cozy Mysteries, while containing some mild profanity, will be enjoyed by readers of clean and wholesome cozy mysteries. Cat lovers and those fond of all things feline, as well as readers of Amanda Lee, Denise Grover Swank, Rita Mae Brown's Sneaky Pie Brown Mysteries and Shirley Rousseau Murphy's Joe Grey Mysteries will not want to miss this series.

About The Author: Louise Clark has been the adopted mom of a number of cats with big personalities. The feline who inspired Stormy, the cat in the 9 Lives books, dominated her household for twenty loving years. During that time, he created a family pecking order that left Louise on top and her youngest child on the bottom (just below the guinea pig), regularly tried to eat all his sister’s food (he was a very large cat), and learned the joys of travel through a cross continent road trip.

The 9 Lives Cozy Mystery Series—as well as the single title mystery, A Recipe For Trouble, are all set in her hometown of Vancouver, British Columbia.