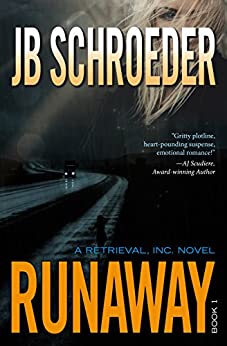 He leaves her no choice but to run—again. Or is it already too late?

While investigating his sister’s disappearance, Detective Mitch Saunders uncovers a disturbing link to one of his old, and very cold, cases: a young woman who walked out her backdoor and simply vanished. When Mitch discovers she’s been in hiding all these years and living under an assumed identity, he also realizes Laura Macnamara—now Charlie Hart—holds the key to his sister’s safety.

Despite the fact that he’s law enforcement and promising protection, Charlie refuses to help him. Between her carefully buried secrets and well-founded fears, her life—and others—will always be in peril. Despite their growing attraction, she knows that to bring his sister home, he’d willingly risk exposing Charlie to danger.

When their loved ones become caught in a predator’s twisted trap and they lose faith in each other, Mitch and Charlie must face their worst fears head on.
This is a gripping, stand-alone, romantic suspense in which a cold case and a missing persons investigation collide. Buried secrets mean past threats are very much alive and danger lurks at every twist in this on-the-run, woman-in-danger thrill ride!
Awards for Runaway:

Check out UNHINGED: Book 1 in the Unlikely Series, where Evil lurks in the most unlikely places… Read more