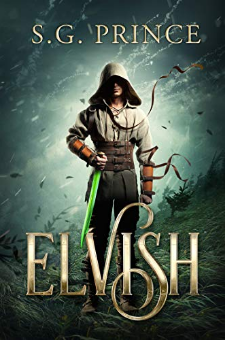 is a stunning tale of lies, love, and the choices that forever change us.

It's against the law for elves and humans to fall in love. But laws can be broken.

When Venick is caught wandering the elflands, he knows the penalty is death. Desperate, he lies about his identity in hopes the elves will spare his life.Ellina doesn't trust the human, and not merely because he speaks the language of men. Men lie. In elvish, however, lying is impossible. In a moment of intuition, Ellina decides to give Venick a chance: learn elvish, reveal his truths, and she will set him free.That is not, of course, what happens.As Ellina and Venick grow to know one another, their feelings start to shift. Then Venick uncovers a dark secret, and suddenly the fate of the elflands seems to rest in his hands. But every choice comes with consequences, and Venick must decide if it's worth risking his life to protect a race that hates him, all to save an elf he's not allowed to love.

Elvish is the first book in S.G. Prince's debut fantasy series and is perfect for readers who enjoy character-driven novels with sweeping prose. With its gritty action, flawed heroes, slow-burn romance and surprising twists, Elvish has won a devoted readership and earned comparisons to fantasy greats like Leigh Bardugo and Maggie Stiefvater.

"Prince is an exceptional new voice in the fantasy genre."

"The writing in this tale is flawless. Each character travels a path of self discovery as the reader goes farther into the complex, often cruel, yet entirely beautiful elvish world."

Patricia Parker, author of The Abode