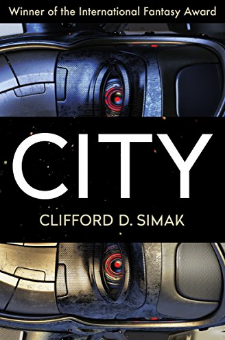 This award-winning science fiction classic explores a far-future world inhabited by intelligent canines who pass down the tales of their human forefathers. Thousands of years have passed since humankind abandoned the city—first for the countryside, then for the stars, and ultimately for oblivion—leaving their most loyal animal companions alone on Earth. Granted the power of speech centuries earlier by the revered Bruce Webster, the intelligent, pacifist dogs are the last keepers of human history, raising their pups with bedtime stories, passed down through generations, of the lost “websters” who gave them so much but will never return. With the aid of Jenkins, an ageless service robot, the dogs live in a world of harmony and peace. But they now face serious threats from their own and other dimensions, perhaps the most dangerous of all being the reawakened remnants of a warlike race called “Man.”   In the Golden Age of Isaac Asimov and Robert A. Heinlein, Clifford D. Simak’s writing blazed as brightly as anyone’s in the science fiction firmament. Winner of the International Fantasy Award, City is a magnificent literary metropolis filled with an astonishing array of interlinked stories and structures—at once dystopian, transcendent, compassionate, and visionary.