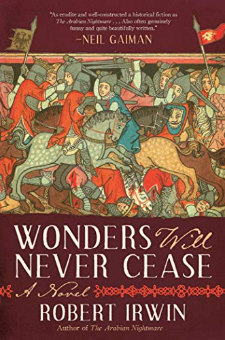 An Exhilarating, Magical Blend of History and Fantasy Set during the Original Game of Thrones. Beginning with the Palm Sunday battle of Towton, the bloodiest ever fought on English soil, Wonders Will Never Cease relates the fabulous adventures of one man and his noble family amid the chaos and political intrigue that beset England during the War of the Roses, when two great houses battled for control of the throne. Anthony Woodville, Lord Scales and brother to the future queen, Elizabeth Woodville, seems to die during that battle and be resurrected. While dead, he witnesses the Grail ceremony last seen during the age of King Arthur, before England was cursed by war and Hell so filled with bodies that the dead now walk the land. What he wakes to and witnesses for the rest of his life as he defends his king is a ceaseless stream of wonders: a family rumored to be descended from the fairy Melusine and imbued with her dragon’s blood, a talking head that predicts the future, a miraculous cauldron, a museum of skulls, alchemists and wizards, the Swordsman’s Pentacle, and plenty of battles, sieges, swordplay, jousts, treachery, murder, beheadings, and horrific torture. And all the while, stories—some so porous that their characters enter history and threaten their maker.