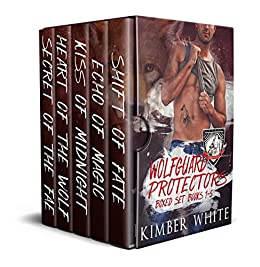 The big one wolf-shifter romance fans have been hungering for! In this huge box set, you'll get the complete Wolfguard Protectors series. Settle in with five, full-length novels (over 1100 pages). This All-Shifter Security Force holds the line between their kind and those who seek to destroy them. Get ready for swoon-worthy shifter heroes, kickass heroines, fated mates, and the action-packed storylines that'll keep you up at night turning the pages.
This set includes:
Shift of Fate
Echo of Magic
Kiss of Midnight
Heart of the Wolf
Secret of the Fae

Shift of Fate
I am Willow’s protector. I am paid to give my life for hers.
As a member of the elite all-shifter Wolfguard Security Team, it’s the job.
One last assignment and I can write my own ticket. Start my own pack.
It should have been easy. Just a cross-country road trip. Get the girl home in one piece.
Then I saw her...
A single touch and I knew we were fated.
A single kiss and I knew I would kill for her.
But Willow belongs to someone else…
If I take what’s mine, it could destroy the life I’ve built and call forth a darkness too big to contain.
If I claim her, it could ruin us both.

Echo of Magic
Meg Crossley hired me to guard a priceless red diamond. But, the second I laid eyes on Meg, I knew she was the greatest treasure of all.
My heart beats for her.
Her touch rouses my inner wolf in dangerous ways.
She knows what she is to me, but it scares her.
An ancient power lurks inside of the stone she holds, waiting to be unleashed.
If it falls into the wrong hands, it could spell the end for every shifter on the planet.
I’m here to keep that from happening. But it might cost Meg's life.

Kiss of Midnight
It’s my duty to capture the woman who killed a member of the coven.
Nadia is considered dangerous.
Her dark and deadly spells spare no one.
I never expected to be so drawn to her.
Could it be her spell?
Probably.
There’s no way we can be soulmates.
There has to be more to the story.
And it has to be us against the world.
But can we truly become one and confess our love for each other?

Heart of the Wolf
I’ve pledged my life to Wolfguard Security. There’s nothing I wouldn’t do to serve this brotherhood.
Then, a wildcat crossed my path.
Nova’s the last of her kind. A female jaguar. Hunted. On the run. Coveted by just about every other shifter on the planet.
If any of them find her, they’ll try to claim her. Own her. Bend her to their will.
And I will destroy them all.
Wanting her is dangerous. The last time I led with my heart, the woman I loved got killed.
I’ll never make the same mistake again. No matter how much Nova’s primal nature calls to mine.
To save her life, I’ll have to let her go.

Secret of the Fae
Zendra holds the key to unlocking a mystery that could destroy every shifter alive.
Her magic is unlike any I have ever felt.
I’m an Alpha Wolf. She’s something different. Ancient. Powerful. Intoxicating.
I crave her just like a drug.
I have no choice but to stay bound to her. At least until I can uncover the secret she’s hiding.
The source of her power.
Only, I have a secret of my own.
If I don’t take a mate soon, I’ll lose control of my wolf for good.
It might already be too late.
I know I should just turn her over to Wolfguard and walk away. Find out if there’s anything left of me to save.
Though I came for the hunt, it’s Zendra who holds me captive.
Pulled between sin and salvation.
Duty versus desire.
There’s only one thing left to do.
Give into fate or lose everything.