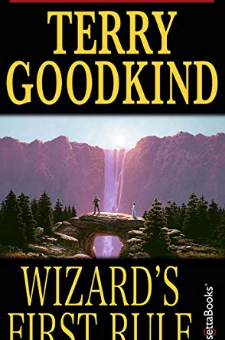 The “wonderfully creative, seamless, and stirring” debut novel in the Sword of Truth epic fantasy series by the #1 New York Times bestselling author (Kirkus).   Terry Goodkind’s debut novel, Wizard’s First Rule, was a phenomenon from the moment it was first published by Tor Books in 1994. In it, readers are drawn into the magical New World, where ordinary Westland forest guide Richard Cypher accepts his extraordinary destiny. As a Seeker of Truth, Richard is the only one who can stop the tyrannical wizard Darken Rahl from seizing the all-powerful Boxes of Orden.   When the beautiful and mysterious Kahlan Amnell appears in Richard's forest seeking help, his humble world is turned on its head. After proving that he can wield the Sword of Truth, Richard knows that a confrontation with Darken Rahl looms. But Kahlan beseeches him to reach beyond his sword and invoke his inner nobility in order to face the dangerous challenges ahead.