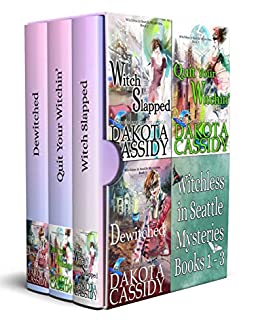 What's a girl to do when she's a broke, shunned ex-witch with a very tiny, very hungry bat familiar named Belfry to feed?

Hello. My name is Stevie Cartwright, and I've been witchless for thirty days.

If only there was a support group for down-on-their-luck ex-witches who've had their powers slapped right out of them (literally). Just as I was licking my wounds after returning to my hometown of Ebenezer Falls, WA, and navigating my suddenly non-magical existence with the help of my familiar, the only friend I have left in the world—things got sticky.

Enter an ex-spy and newly departed spirit named Winterbottom, who's infiltrated my life with his sexy British accent and a couple of requests...

Thanks to Belfry's successful attempt to use me as a human antenna to the afterlife, I can somehow hear Win. I should be ecstatic; helping departed souls used to be my witch specialty. It's like I got the teensiest piece of my old life back. Except Win's dropped me right at a dead woman's feet.

Madam Zoltar, the town's beloved fake medium, has been murdered, and Win wants me to catch the killer.

My old life won't be worth much if it gets me whacked before my new life has barely begun--and that seems to be exactly what the killer has planned!

There's been another murder in Ebenezer Falls, Washington State, and Stevie, Winterbottom, and Belfry are on the case…sort of!

Tito Bustamante, my beloved purveyor of mouth-watering Mexican munchies, has been found dead in the food truck court! Rumor has it Tito was stickin’ his chimichanga where it didn’t belong, and my gut-not to mention his less-than-natural death-says murder.

No one is above suspicion. Not Tito’s own wife and daughter, not his arch food truck enemy Jacob…certainly not the son Tito didn’t know about, newly arrived in Ebenezer Falls and getting cozy with my hired help.

Do join me (and try not to point and laugh) as I juggle catching a killer with the home renovations from hell, snooping for clues about Win’s previous life, gabbing with and eavesdropping on the locals, and enduring a visit from my very unwelcome, very annoyingly gorgeous ex-coven leader-all while continuing to adjust to my new witchless existence!

I, ex-witch Stevie Cartwright, do hereby solemnly swear to avoid future murder-mystery shenanigans, nosiness, tomfoolery, and any further crazy killer inflicted pain to my person, so help me goddess…

Hah! Like I could help myself? But after busting my butt (literally!) on the last murder case in my beloved hometown of Ebenezer Falls, WA, I could use a nice long break. I was determined to take the time to enjoy the company of my bat familiar, Belfry; my British ex-spy ghost, Win; our adorable St. Bernard rescue, Whiskey; and of course our gorgeous home, Mayhem Manor, freshly and lovingly renovated.

Until shazam—a dead man invites himself to our fancy housewarming party! When my mother's husband number five ends up deep-sixed in my parlor, it's not like I can't NOT try to solve this mystery, right? Especially if I ever want Mom to leave so I can get back to my semi-peaceful existence.

But our work is definitely cut out for us this time!