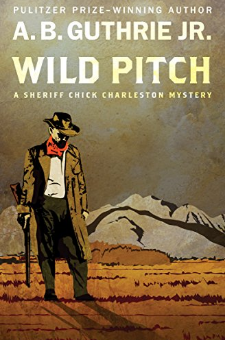 A self-made cattle baron with a bad habit of letting his stock graze on his neighbors’ property, Buster Hogue has stepped on plenty of toes in Midbury, Montana. But orneriness is a virtue in this rough and beautiful land, and Buster’s disputes have always ended amicably—until tonight. Shot in the head at a picnic outside town, the crusty old rancher is rushed to the hospital barely alive. On a night when the moon shone bright enough to take target practice by, no one saw who pulled the trigger or where the bullet came from.

With a plethora of motives and no real evidence, Sheriff Chick Charleston sets out to solve his first case of attempted murder. Aided by his eager sidekick, seventeen-year-old local pitching prospect Jason Beard, the sheriff employs every ounce of his wit, intelligence, and intuition to track down the ruthless sniper. The trail ends in a climactic showdown that will change the investigative duo’s lives forever.

Populated with a colorful cast of local characters and enlivened by a wry humor and A. B. Guthrie Jr.’s keen appreciation for the rhythms of small-town Western life, Wild Pitch is the story of an impossible crime and the two men clever enough to solve it.