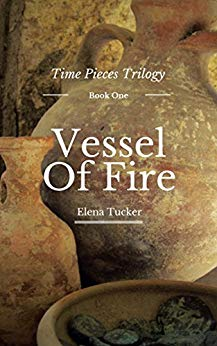 When archaeologist, Dr Lem Fort begins excavating the ruins of ancient Beit Sha’al, he unknowingly delves into the long-ago life of a young girl and potter, Tamar. Set across both contemporary times and the second century, Vessel of Fire draws a picture of life on the northwest corner of the Dead Sea during one of Judaism’s bravest and riskiest revolts against Rome. Tamar’s uncertainties, fears, and spiritual questions are not, in the end, that different from those of Ford who struggles with his own losses and temptations.Vessel of Fire is the first book of the Time Pieces trilogy in which author Elena Tucker profiles a century of almost unthinkably different daily existence. It was a time of simplicity in the midst of unrest, a time when strict and established ways were turning inside out because of small communities today called Christian. Yet the essence of life then was no different than it is today. And as he excavates three sites, archaeologist Lem Fort handles every coin, vessel, and sherd as his last connection with some long-forgotten individual; Fort recognizes these artifacts as pieces from time.Far from empty remnants, Tucker's “vessels” brim with imagination, soul, and period experiences. Breaking away from traditional Christian fiction, Vessel of Fire, Vessel of Strength, and Vessel of Hope follow humanity's ongoing spiritual quest - as experienced by characters two millennia past, and by the archaeologist who sifts through their ruins.Elena Tucker is an award-winning feature writer for a small-town Texas newspaper. She participated in her first archaeological excavation almost 30 years ago with her husband, a career Near East historian and archaeologist.