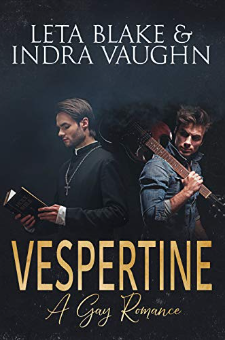 Can a priest and a rock star obey love's call?Seventeen years ago, Jasper Hendricks and Nicholas Blumfeld's childhood friendship turned into a secret, blissful love affair. They spent several idyllic months together until Jasper's calling to the Catholic priesthood became impossible to ignore. Left floundering, Nicky followed his own trajectory into rock stardom, but he never stopped looking back.Today, Jasper pushes boundaries as an out, gay priest, working hard to help vulnerable LGBTQ youth. He's determined to bring change to the church and the world. Respected, admired, and settled in his skin, Jasper has long ignored his loneliness.As Nico Blue, guitarist and songwriter for the band Vespertine, Nicky owns the hearts of millions. He and his bandmates have toured the world, lighting their fans on fire with their music. Numbed by drugs and fueled by simmering anger, Nicky feels completely alone. When Vespertine is forced to get sober, Nicky returns home to where it all started.Jasper and Nicky's careers have ruled their lives since they parted as teens. When they come face to face again, they must choose between the past's lingering ghosts or the promise of a new future.