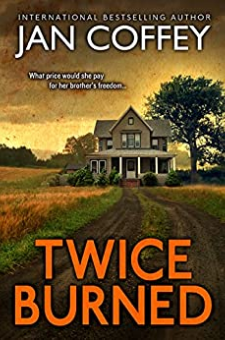 Kiss of Death Mystery/Suspense Daphne du Maurier Award — Winner for Best Single Title Novel National Readers’ Choice Award Finalist — Best Single Title — Twice Burned.RWA RITA Award — Finalist for Best Contemporary Single Title Novel — Twice Burned.A man awaits execution for a murder he did not commit . . . A woman returns to a place of scandal and death to save her brother . . . A small town's simmering secrets are about to ignite in a blaze of suspicion and deadly retribution . . . Twenty years ago, Lea and Ted Hardy came home from school to find their parents dead, victims of a murder-suicide. Lea leaves the small town of Stonybrook and the painful memories behind. But Ted can't seem to escape the past. Marrying the pampered daughter of Stonybrook's leading family, he starts a new life—until he discovers secrets that lead to the death of his wife and daughters. And to accusations of murder. Now, convicted and facing execution, Ted has given up hope. Then Lea receives anonymous letters proclaiming Ted's innocence. Determined to save her brother, she must return to a town that harbors a fierce desire to see Ted die . . . taking long-buried secrets with him. Desperate, Lea turns to Mick Conklin, a man she is deeply attracted to but cannot fully trust. She needs an ally, now more than ever. Because the fuse has been lit, and the bright fires of truth are about to blow Stonybrook wide open.What others say about Twice Burned:"Jan Coffey...skillfully balances small town scandal and sexual intrigue with lively plotting and vivid characterizations in this engaging romantic thriller." – Publisher's Weekly"...fabulous!!! I loved every last word....I never let anyone read my copies...I want them to buy their own...but I do let my husband read the ones I know he will like, and this one is a must." – Dede Baker, A Novel Idea Bookshop