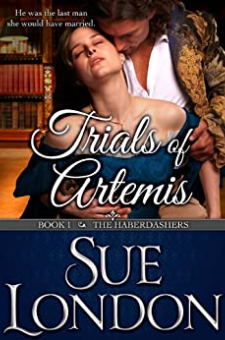 The HaberdashersIn 1805 three little girls decided to create a "boys club" because boys have more fun. Their childhood was filled with sword fighting, horse racing, and archery. Now in 1815 they are all grown up and expected to join Society. Who will marry such independent and deadly misses?Trials of Artemis(Regency, Hot) Loving Lord Lucifer...An independent bluestocking sneaks into a library to read rare Greek texts and ends up with a husband instead.Jacqueline "Jack" Walters loves archery and Greek military history. In her third season she has failed to inspire so much as one marriage proposal and is planning to settle into the quiet life of a spinster. Gideon Wolfe, Earl of Harrington, has been avoiding marriage but a case of mistaken identity in the library has left him saddled with an argumentative and unwilling fiancée.What readers are saying:"I enjoyed seeing the relationship play out betweenthe two main characters, especially since the author decided to makethem both forthright and honest with each other, being able to pick upon emotional cues, instead of relying on misdirection andmisinterpretation to lengthen the story, as is usually the case in thisgenre.""Their characters and their relationship develop at an almostperfect pace as the book progresses (with bumps along the newlywed road,of course). If you like a strong female, this is the book for you."