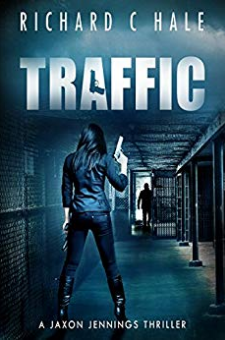 Family is everything.Would you kill to protect it?When Jaxon Jennings witnesses a woman attack a man and kill him, his only thought is to apprehend the woman and bring her to justice. But when he discovers the mysterious and deadly woman, Adi Jordan, is on a mission to save her kidnapped daughter, he can only imagine doing one thing.He must help her.In a race against the clock and insurmountable odds, Jaxon joins forces with Adi in a desperate battle with the Russian mob to track down her daughter and get her back before the trail grows cold and Adi’s daughter is lost to the world of human trafficking.Adi’s dark and mysterious past only adds to the pressure as her brutal and ruthless tactics bring Jaxon to a place he’s never been before. But will her actions destroy any chance they have of finding her daughter and surviving? Jaxon must walk a thin line between what is right and wrong. Will it be enough?From the first sentence of his latest Jaxon Jennings Thriller, Traffic, author Richard C Hale piles on the suspense and kicks it into high gear. A pulse-pounding, thrill ride that pulls you in and never lets up, Traffic will keep you on the edge until the surprising end.