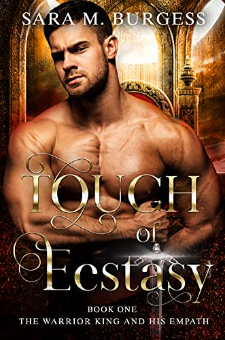 What happens when a warrior-king who can’t feel physical sensation meets the one woman who makes him feel everything?

After a surgery gone wrong, Asher Drydan lives for nearly a century without the ability to feel physical touch, and he’s accepted that fate—until he meets Kenna Breen, and his life is turned upside down. Her touch sears him to his core and brings his once-gray world into stunning color. For the first time in decades, Asher has something more to live for than fighting.

As an empath, Kenna has always been subjected to the feelings and emotions of others. Asher is the first person to see her as more than her abilities. The sexy warrior king does dangerous things to her, like make her forget they aren’t the only two people in the world. But the safety of her homeland is at stake, and Asher’s the only one who can save her people.

As scorching desire pulls Kenna and Asher together, they uncover secrets of gods and death that shake what they once knew as truth. Can they survive the chaos of two worlds colliding in a war that promises destruction?