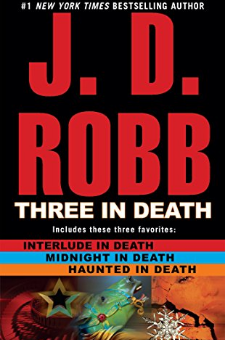 #1 New York Times bestselling author J. D. Robb delivers a potent combination of futuristic suspense, thrills, and passion in these three favorite In Death stories—together in one volume for the first time.INTERLUDE IN DEATHLieutenant Eve Dallas is resigned to the fact that she’s been ordered to give a seminar at a police conference—and that she’ll have to leave Earth to do it. But her dedication to her job only goes so far. And when a legendary commander sets his sights on taking her husband, Roarke down, Eve will do everything in her power to stop him…   MIDNIGHT IN DEATH Eve’s name has made a Christmas list, but it’s not for being naughty or nice. It’s for putting a serial killer behind bars. Now the escaped madman is dogging her steps. With Roarke at her side, Eve must stop the man from exacting his bloody vengeance—or die trying…   HAUNTED IN DEATH At the scene of a murder, Eve uncovers the remains of beautiful singer who went missing eighty-five years earlier. Both victims were shot with the same gun, in a building rumored to be haunted by the singer’s ghost. But Eve focuses her attention on those in the here-and-now who had a bone to pick with the dead…