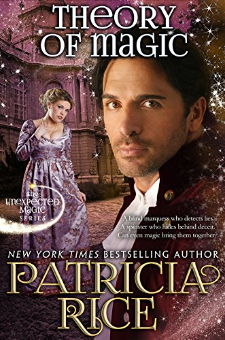 The third exciting book in NY Times bestseller Patricia Rice's Unexpected Magic historical romance series!A blind marquess who detects lies...A spinster who hides behind deceit...Can even magic bring them together?Scorned by suitors for her statuesque size, Harriet Stansbury bolts when opportunity offers a position in a mad marquess’s eccentric household.Once a dashing rakehell, Duncan Ives, Marquess of Ashford, lost his eyesight in a murderous assault. Abandoned by his fiancée, unable to ride the vast fields of his estate, he vents his frustration on political reform. On impulse, he hires the intriguing, smoky-voiced Harriet even though he knows she’s lying—like him—with almost every word she speaks. At first Harriet is a godsend, oddly anticipating what he needs and abating his worst rages. But when her stepfather accuses Duncan of ruining her, the scandal threatens everything he’s salvaged from the wreckage of his life. Avoiding scandal for the sake of his country, Duncan agrees to marriage. With her secret gift of empathy, Harriet isn't so certain. She's falling in love with the impossible marquess, but dare she risk her wounded heart for a man who can’t love her? And can Duncan learn to trust a woman whose tempting curves paralyze his good sense, but who is far more than she seems?Romantic Times Review 4 1/2 star Top Pick: "Known for her masterful talent for writing whimsy, humor and mayhem, Rice gives the reader a delightful romantic adventure in the third book of her Unexpected Magic series. Along with her recurring characters, she pairs a statuesque Malcolm female who is the perfect foil for the blind, arrogant, frustrated Ives male. She includes sensuality, an abduction, political skullduggery along with lively verbal bantering in this mystical, magical tale of love"-- Joan HammondScroll up and get your copy of Theory of Magic today!Unexpected Magic Series in order:Magic in the Stars Book # 1Whisper of Magic Book #2Theory of MagicBook #3Aura of MagicBook #4Chemistry of Magic Book #5No Perfect Magic Book #6