The Witches of Salix Pointe 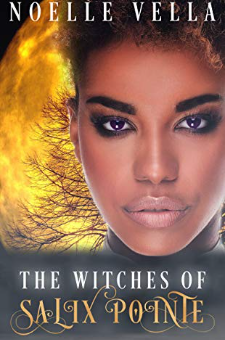 Nestled between Little St. Simons Island and Jekyll Island, Salix Pointe is not a place that many people know of. As a part of the Golden Isles of Georgia, it’s never mentioned because of all the Weeping Willows that grow there. The surrounding town’s folk call it the Island of Death.Elisa Hunte never let the old suspicions bother her. Yeah, there had been some strange things that had happened in the town like floating objects and people disappearing in the night, but that happened everywhere, didn’t it? Even though every night, she dreamed of the same faceless man who did things to her body that were carnal sins, she knew most of the talk about Salix Pointe was just old folklore. Elisa also knew that she was different. She seemed to sense things before they happened. That was just good ole instinct, right?Tasmin Pettiford was a city girl through and through. She hated the country, particularly Salix Pointe. If it wasn’t for the fact that her favorite aunt had recently passed away, and willed her bookstore to her, Tasmin would have never returned to the island that disturbed her on so many levels. There were stories of townspeople practicing magic regularly, others seeming to vanish without a trace, and the bookstore seemed to be the epicenter of all things weird and unusual. Tasmin couldn’t offload the property fast enough. The sooner it was sold, the sooner she'd be back in New York, away from the mosquitoes, the bookstore, and the eeriness of a town that caused many a nightmare during her childhood. Or could it really be that simple?Not to mention, Elisa couldn’t explain why her body reacted the way it did to the town’s brooding vet, Dafari Battle. And when his even sexier brother Octavian Jerrod stepped into town, dragging otherworldly trouble along, Salix Pointe will never be the same.Elisa and Tasmin may not want to put too much stock into the folklore of Salix Pointe, but there is a reason that the universe has brought the two women together.