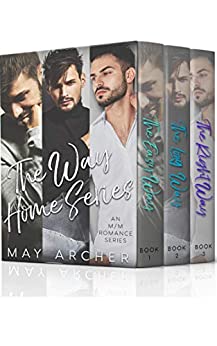 Find your Way Home with the complete 3-book Way Home series, along with a bonus short story that's never been available on Amazon before!
The Easy Way: When Kendrick Cortland's investigation into his brother's disappearance leads him to Seaver Tech and Camden Seaver, his quest for information and revenge quickly turns into far more than either man bargained for. Will Cam and Cort let conflicting loyalties and long-buried secrets drive them apart? Or will they decide that sometimes love is the easy way?
The Long Way: Damon Fitzpatrick has sworn to bring down Senator Shaw, then man who ruined his life. But when his quest for justice goes awry, Cain Shaw, the senator’s only son, becomes Damon’s unlikely savior, and the two are thrown together in a hunt for evidence that will free them both. As the road gets longer, the stakes get higher, and the danger that stalks them draws closer, they realize the one complication they can’t outrun is each other.
The Right Way: Sebastian Seaver is obsessed with destroying Alexei Stornovich, the man responsible for the deaths of his fiancée and parents -- no small task for anyone, even someone as brilliant as Bas. It’s made even more complicated by the growing attraction he’s feeling to his best friend Drew… who also happens to be his fiancée’s older brother. With Alexei targeting them and their friends, Drew and Bas are forced to rely on each other more than ever. Will they recognize that the only right way to move forward is the one in which they’re together?
Bonus short story:
The Way Back: High school ended a long time ago, and Peter’s not the same sappy idiot who used to trail after his older brother’s straight best friend. So it shouldn’t matter that Logan is back in town for one night only, or that he and Peter end up at the same outrageous house party. The only problem is, Cupid can’t seem to keep his nose out of their business.