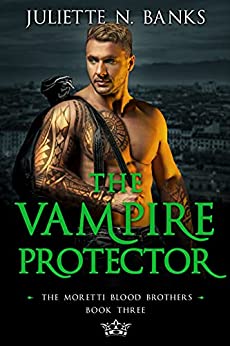 Can he let go of the past for true love?

Commander of the vampire army, Craig found and lost his mate three hundred years ago. Or so he thought. Then he met Brianna Jones. When the two of them are forced together in Italy, after her life is threatened by vampire rebels, it becomes harder to ignore their powerful attraction and his growing feelings for the sassy human.

Yet Craig remains in denial that she could be his mate, and they both know a human cannot stay in his world.

When it’s safe, he must return Brianna to Los Angeles and wipe her memories. It’s his job to protect the race, and now the sophisticated operation of the rebellion threatens their very existence. He can’t allow his feelings for Brianna to distract him.

Can Craig win the war, and then let Brianna go, or will he face his past and accept that she’s his true love?

The Vampire Protector is book three, in the steamy new paranormal romance series, the Moretti Blood Brothers, filled with powerful alpha males and sassy, independent females who aren’t afraid to give them a run for their money.