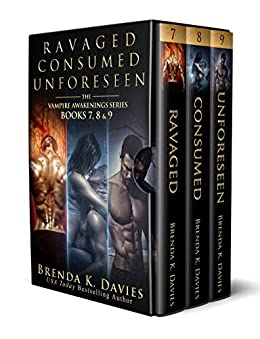 Continue the epic tale of the Byrne family and friends with books 7-9 in the USA Today Bestselling Series.Book 7: RavagedDarkness calls to Aiden, and he’s fighting a losing battle.

Since the day he stopped aging, it’s threatened to consume him. He only hopes someone kills him before he gives in to the savage nature fighting for control. Just when he believes he’ll lose the battle, he encounters Maggie, and for the first time in years, he has hope for his future.

Can Maggie bring him back from the darkness ravaging his soul, or is it too late to save him?Book 8: ConsumedWhen Mollie awakens to find herself in a cage, she doesn’t remember how she or her sister got there, but she discovers they are not alone in their nightmare.Mollie vows to do whatever it takes to rescue Aida when their captors take her sister from her cage. She just needs to figure out how to escape first.Mike and his friends discover themselves imprisoned by Savages in the aftermath of an attack they never saw coming. Unsure of how to break free, he’s surprised to learn the human next to him is the key to his freedom... and his future.Book 9: UnforeseenWhen Jack escapes the vampires holding him captive, he thinks his biggest worries are finding his friends and avoiding the Savages pursuing him...until he stumbles across Charlie.He’s not sure what’s more dangerous, the vampires hunting him or the woman who harbors more secrets than the island where he’s trapped.

Can they work together to survive the horrors of the island, or will they perish like so many before them?***Due to sexual content, violence, and language, these books are recommended for readers 18+ years of age.***