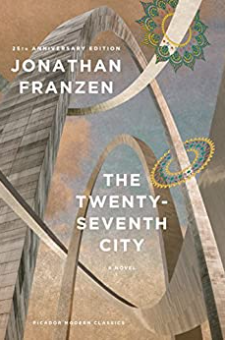 25th Anniversary Edition Picador Modern Classics Published in 1988, Jonathan Franzen's The Twenty-Seventh City is the debut novel of a writer who would come to define our times. St. Louis, Missouri, is a quietly dying river city until it hires a new police chief: a charismatic young woman from Bombay, India, named S. Jammu. No sooner has Jammu been installed, though, than the city's leading citizens become embroiled in an all-pervasive political conspiracy. Set in mid-1980s, The Twenty-Seventh City predicts every unsettling shift in American life for the next two decades: suburban malaise, surveillance culture, domestic terrorism, paranoia. A classic of contemporary fiction, The Twenty-Seventh City shows us an ordinary metropolis turned inside out, and the American Dream unraveling into terror and dark comedy.