The Ties of Steel 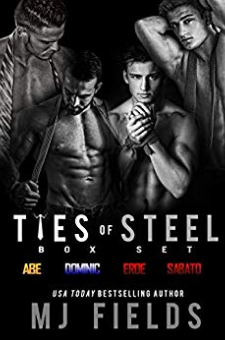 AbeTwenty-six-year-old Abraham O’Donnell is the CFO of Steel Inc. After working tirelessly for over a year, he takes a week off to enjoy the sand, surf, and bikini-clad women of Ft. Lauderdale, Florida. After all, he's earned it. While floating naked in the pool, he learns a guest house on the property is also occupied. So much for rest and relaxation. Ever the gentleman, Abe tries to make the most of his misfortune and offers to make the beauties staying on the property some dinner. It's senior year and Nikolette (Nikki) Bassett is a few days late for her last college Spring Break with her four best girlfriends. When she arrives, all these ladies can talk about is the guy next door. And once Nikki gets a look at him, she knows what they mean. Fresh from an afternoon of surfing, Nikki can hardly believe her eyes when Abe approaches. The sexual tension and banter between the two of them leads to steamy hot sex on the Atlantic shore. It's only a Spring Break fling, and both Abe and Nikki know better than to make it out to be more than that. Or do they? Abe’s calm demeanor changes once he has a taste of Nikki. That night, no location is safe. He takes her on the beach and ravages her in his bed. But despite their mind-blowing sex, Abe's taste for ultimate control in the bedroom makes Nikki uneasy. Reluctantly she walks away. But Karma is a bitch, and Abe blames her for Nikki leaving him the way she did. When Nikki shows up unexpectedly, Abe welcomes Karma with open arms. Control has left the building and safety of one's heart is no longer strong enough to stop what happens next. DominicThe Italian, seductive, quiet alpha, Dominic Segretti, is leaving Livorno, Italy and headed for the Jersey Shore. His family's business is in danger of crumbling under the management of a man who tormented and grossly underestimated his investment in a business he grew up loving, and the hatred of a man who made his life hell for thirteen years. Quietly waiting for the right moment to bring Benito Deluca to his knees. He comes to the US, armed with enough evidence to prove his case. The night before he plans to tell them of the corruption that could cause the demise of DeLuca INC, he decides to take a night to de-stress. He plans a night of relaxation and enjoyment on the shore. Delaney Johnson is starting over after a break-up and graduating college. She has landed the job of her dreams in NYC. Arrangements had been made to stay with her best friend, NikkiFeeling that her luck has suddenly changed, she stops to play a few slots, just for fun. She finds herself winning big, and gains an admirer. One hot night of uninhibited sex with a stranger takes her places she never knew she could go. Will this one hot night turn into many, or will the Beast's plans crush any hope of them exploring their future?Eroe novellaBorn from an unholy union, the bastard son of a martyred saint and the Devil. At least, that's what he's believed, for most of his life.And those who are born into darkness, must carry that cross forever....SabatoSabato Efisto is a cursed man. Born from sin, raised in revenge, he’s made a name for himself doling out pleasure and punishment in the lush Italian Riviera. io brucio.... When the sins of his father come to rest on his shoulders, Sabato trades his privileged—but dangerous—life as the son of a mafia kingpin for the untested—but willing—shores of New Jersey. Acquiring a sex club called Steelettos is only the first phase in his plan to seduce and tame his new American landscape. Phase two involves finding a woman who can meet his...very singular, and definitely less-than-legal needs. io conquisto.... Enter Melyssa Chance, a sassy southern law student who is as untested as they come. From the first glance, Melyssa knows that the sexy Italian is going to le