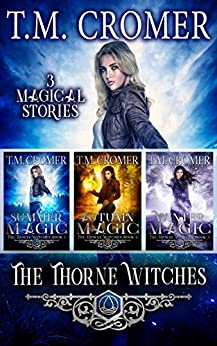 The Thorne Witches is a paranormal romance with zany characters and hijinks. Due to adult themes and sexual content, this book is not recommended for anyone under the age of 18. Also, if you are a miserable cow without a lick of humor, move along. This book is not for you. Heat level: 3.5SUMMER MAGICLife in a small town can be tough. It can be even tougher when you're a witch whose magic regularly backfires. But Summer Thorne only wants one thing: to create the perfect sanctuary for unwanted animals. Nothing and no one is going to stop her. Not even the sexy sheriff who is determined to shut down her rescue center. And certainly not the laboratory where she illegally obtained her mischievous chimpanzee, Morty.Sheriff Cooper Carlyle has one goal: to keep his town safe. That includes his stubborn neighbor, Summer, whether she wants him to or not. When the animals of Summer's menagerie get loose and create havoc, he decides enough is enough. But things aren't always as they appear, and Coop stumbles upon the secret the Thorne sisters have been hiding.Coop and Summer discover Morty holds the key to unlock a twenty-year-old mystery surrounding the death of Summer's mother. Now Coop is faced with breaking the law he is sworn to uphold in order to protect Summer and her beloved pet from a threat more dangerous than any of them imagined.AUTUMN MAGIC ??One powerful witch. One warlock in training. One failed relationship between them. An old enemy knocking at the door. What could possibly go wrong?Autumn Thorne believed she discovered the perfect love. Yet the moment she revealed she was a witch, her relationship went to hell in a handbasket. Nearly a decade later, in an ironic twist of fate, the man who shunned her shows up on her doorstep and asks for her help to develop his own latent powers.For the better part of nine years, Keaton Carlyle has tried to forget the one woman whose very touch made him burn with uncontrollable desire. Now, left with no choice, he must seek her out to master the magic building within. But the more time Keaton spends with Autumn, the more he realizes his old feelings for her have never truly been extinguished and the flames blaze hotter than ever.When Autumn sets off on a mission to uncover an ancient artifact crucial to saving her mother, Keaton is hot on her heels, determined to make up for the wrongs of the past and rescue Autumn from the clutches of the madman holding her hostage. Faced with life or death, they must learn to work together. But can Autumn ever again trust the man who so cruelly betrayed her?WINTER MAGICWhat starts out as a game of revenge turns dangerous when an old enemy resurfaces.Feeling hurt and more than a little betrayed, Winter "Winnie" Thorne decides it would be best for her new lover to forget their relationship ever happened. In an impulsive move, she casts a spell and wipes his memory clean. The recollection of their time together is now hers alone.Every time Zane Carlyle sets eyes on Winnie Thorne's enchanting face, déjà vu strikes. It's as if their first date has already happened and their first kiss has already rocked his world. He can't seem to shake the feeling there's something he should remember. After Zane gains his magical abilities, his suppressed memories return along with a burning anger at being tricked. Zane decides turnabout is fair play.When Winnie needs help recovering a charmed amulet, Zane offers his assistance, knowing it is the perfect opportunity to exact retribution for Winnie's deception. This time, she'll be the one who is played for a fool. But what starts out as a game of revenge turns dangerous when an old enemy resurfaces. Can Zane and Winnie put their differences aside to fight this