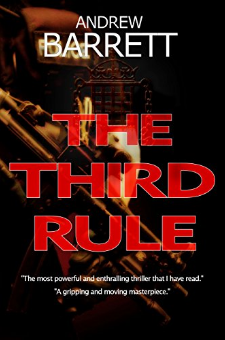 He’s a CSI, an ex-father, and a drunk. Eddie Collins is about to learn what it takes to kill someone.Beating an armed street robber creates a reluctant hero in CSI Eddie Collins. Ultimately it costs him his family. With his life in ruins, the only thing of value he has left – his freedom – is in danger when he’s accused of murdering a police colleague.The Third Rule means death for Eddie and for a string of other innocent ‘killers’ too.But Eddie and his alcoholic friend, Mick – a journalist with one big story left to tell – refuse to die without a fight. And that fight involves finding the evidence and the shocking truth behind The Rules and the justice minister who created them.Alongside a hunter brought in to track them and kill them is a detective who loves the idea of slaughtering criminals – even if they’re not guilty. The chase is on.If the truth gets out, the government will fall. If it stays hidden, Eddie will die.The Third Rule will pull at every emotion you possess, and leave them shredded.If you like fast-paced crime thrillers with a forensic slant, raw emotions, and characters that grab you by the throat, you’ll love Andrew Barrett’s CSI Eddie Collins series.To experience Eddie’s battle to uncover the lies they told, buy The Third Rule now.What people say about The Third RuleA gripping and moving masterpieceThe story is paced perfectly and layered in a way reminiscent to Stephen King novelsMy kindle came with me everywhere so I could catch another chapter or even paragraphthe rewards of reading this epic tale are great...get your copy if you dare!Frighteningly realisticThis is a chilling and all too realistic vision of the British Legal system as could worryingly happen in today's haphazard political climateAndrew Barrett has become one of my favourite authors and I have just purchased 'Black by Rose' to read very soonAn excellent read. One of those books you can’t put down. A great story and well written -look forward to more similarTV DRAMA, PLEASE. NOW!It’s been a long while since I finished a book, and then sat there for a few minutes reflecting on the story I’ve just read. If you like fast-paced and gripping crime thrillers with a strong forensic element, you'll love Andrew Barrett's The Third Rule. It will appeal to fans of authors of Kathy Reichs, Robert Bryndza and Angela Marsons.Also available by Andrew Barrett:The Third Rule - CSI Eddie Collins 1Black by Rose - CSI Eddie Collins 2Sword of Damocles - CSI Eddie Collins 3Ledston Luck - CSI Eddie Collins 4The Death of Jessica Ripley - CSI Eddie Collins 5The Lift - An Eddie Collins Short StoryThe Note - An Eddie Collins NovellaThe Lock - An Eddie Collins NovellaA Long Time Dead - Roger Conniston 1Stealing Elgar - Roger Conniston 2No More Tears - Roger Conniston 3 The End of Lies – “A fantastic psychological thriller!”