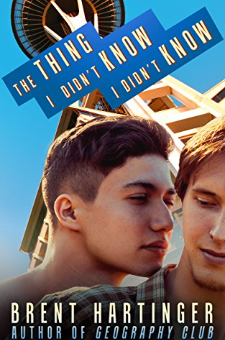 "I guess this was what they meant by a loss of innocence. Who knew?"Russel Middlebrook is twenty-three years old, gay, and living in trendy Seattle, but life isn't keeping up with the hype. Most of his friends have a direction in life—either ruthlessly pursuing their careers or passionately embracing their own aimlessness. But Russel is stuck in place. All he knows is that crappy jobs, horrible dates, and pointless hook-ups just aren't cutting it anymore.What's the secret? What does everyone else know that he doesn't?Enter Kevin, Russel's perfect high school boyfriend. Could rekindling an old flame be the thing Russel needs to get his life back on track? Or maybe the answer lies in a new friend, an eccentric screenwriter named Vernie Rose, who seems plenty wise. Or what the hell? Maybe Russel will find some answers by joining his best friend Gunnar's crazy search for the legendary Bigfoot!One way or another, Russel is determined to learn the all-important secret to life, even if it's a thing he doesn't even know he doesn't know.Author Brent Hartinger first made a splash writing books for teens. The Thing I Didn't Know I Didn't Know, Hartinger's first book for older readers, is just as much of a page-turner as his earlier works, with plenty of his trademark irreverent humor. But now his books have grown up along with his readers, exploring the issues of new adults, especially the complicated matter of love and sex.Praise for Brent Hartinger"Hits the narrative sweet spot."- NPR's All Things Considered"Downright refreshing."- USA TodayBRENT HARTINGER is an author, teacher, playwright, and screenwriter. Geography Club, the book in which Russel Middlebrook first appears (as a teenager), is also a successful stage play and a feature film co-starring Scott Bakula.In 1990, Brent helped found one of the world's first gay teen support groups, in his hometown of Tacoma, Washington. In 2005, he co-founded the entertainment website AfterElton.com, which was sold to MTV/Viacom in 2006. He now lives in Seattle with his husband, Michael Jensen.