The Temptation of Forgiveness 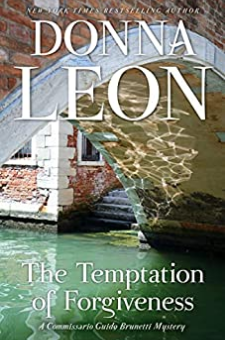 The New York Times–bestselling series transports us to “Donna Leon’s enticing, troubled and beautiful Venice . . . Her latest mystery is one of her best” (Providence Journal).  A New York Times Book Review Best Crime Book of the Year • A New York Times Book Review Editors’ Choice • A Financial Times Summer Book Pick • A Deadly Pleasures Mystery Magazine Most Anticipated Mystery of the Year   Commissario Guido Brunetti is surprised by the appearance of a friend of his wife’s, fearful that her son is using drugs and hopeful Brunetti can somehow intervene. When the woman’s husband is found unconscious with a serious brain injury at the foot of a bridge in Venice after midnight, Brunetti is drawn to pursue a possible connection to the boy’s behavior. But the truth, as Brunetti has experienced so often, is not straightforward.   While Brunetti pursues several false and contradictory leads, he becomes exasperated by the petty bureaucracy that constantly bedevils him and threatens to expose Signorina Elettra, his superior’s secretary. But steadied by the embrace of his own family and by his passion for the classics, he reads Sophocles’s Antigone, and, in its light, considers the terrible consequences to which the actions of a tender heart can lead.   “It’s the living, bleeding humanity of the characters that makes Donna Leon’s police procedurals so engaging. . . . Tagging along after this sleuth is a wonderful way to see Venice like a native.” ?The New York Times Book Review   “[A] droll and intelligent series.” ?The Wall Street Journal   “[A] richly rewarding series . . . from a master of character-rich crime fiction.” ?Booklist