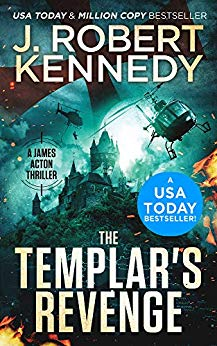 *** A USA TODAY BESTSELLER FROM MILLION COPY SELLING AUTHOR J. ROBERT KENNEDY ***ARE EIGHT CENTURIES OF DUTY AND HONOR ABOUT TO COME TO AN END?The True Cross, revered by Christianity as that upon which Jesus Christ was crucified, was lost to the Muslims led by Saladin during the Battle of Hattin on July 4th, 1187 AD.This is history as it was written.But it is wrong.Join Archaeology Professor James Acton and his wife Laura Palmer, as they are thrust into the middle of a bitter conflict between what remains of the Knights Templar, torn apart over an oath sworn 800 years ago, an oath that may destroy them once and for all, taking Acton and Laura with them.From USA Today and million copy bestselling author J. Robert Kennedy comes The Templar’s Revenge, the next installment in the action-packed globe-spanning James Acton Thrillers series, certain to have you on the edge of your seat from page one. If you enjoy fast-paced adventures in the style of Dan Brown, Clive Cussler, and James Rollins, then you’ll love this thrilling tale of archaeological intrigue. Get The Templar’s Revenge today, and discover what really happened to the True Cross, and the Knights Templar!About the James Acton Thrillers:????? "James Acton: A little bit of Jack Bauer and Indiana Jones!"Though this book is part of the James Acton Thrillers series, it is written as a standalone novel and can be enjoyed without having read any other installments.????? “Non-stop action that is impossible to put down.”The James Acton Thrillers series and its spin-offs, the Special Agent Dylan Kane Thrillers and the Delta Force Unleashed Thrillers, have sold over one million copies. If you love non-stop action and intrigue with a healthy dose of humor, try James Acton today!????? “A great blend of history and current headlines.”