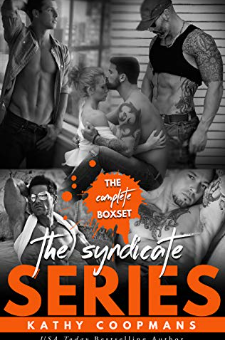 Join the Diamond Empire as this mafia family shows the world who rules, and the men protect the women they love in this limited edition five-book collection.The Wrath of CainEloped at the age of 18. Separated at the age of 18. Disappeared at the age of 18. This is what happened to Calla Greer. Her perfect life was shattered on her wedding day when she caught her husband Cain with another woman just hours after they said I do. With her heart broken, she moves across the border to Windsor, Canada to get away from the nightmare she stumbled upon.After six long years of still being married, Calla returns to Detroit to have Cain sign divorce papers. Only Cain has changed. He's bitter, angry, and for a good reason.Cain Bexley had 15 minutes to destroy his marriage to protect the woman he loved. He did the only thing he could think of to make her leave. He jumped in bed with a woman. Life at home was a lie. Lives were at risk. People are not who they seem. When Calla shows up begging for a divorce. He shows her exactly who he is and no way in hell will he sign those papers.When all the lies surface will she be able to forgive everyone she has trusted in her life or will Calla turn to the man who destroyed her?The Redemption of RoanRoan Diamond's loyalty to the family may be obligated by blood, but nobody ever said he had to love them all, right?As the next in line to head the Diamond dynasty, he has loose ends to take care of, and one of those is his brother Royal. Yet his plans for revenge fall apart the minute he lays eyes on Alina—Royal's ex-girlfriend, who also happens to be the daughter of the rival Solokov family.As a mafia princess, Alina Solokov knew it wouldn't be easy when she made the decision ten years ago to leave the family for a new life at a college in England—but betrayal is often a dish served cold by those who you love the most. Now, back in the United States after a job offer that she couldn't refuse, her new found strength is pushed to the limits when Royal returns to claim her for his own.The Absolution of AidanAidan HughesI was cruel to Deidre La Russo. Said things I should never say to a woman.Seen things happen to her.Things darker than the bottle of liquor I consume.I felt helpless.Defeated.The memories are more tortuous than the act of her torture.Then she walks back into my life, only she's not alone. The Deliverance of DilanDilan Levy.The mystery man.The man with a war to end.The man who was put behind bars for a crime he didn't commit.The man who disappeared.The man who fell for an innocent woman.The man is back to deliver his rightful revenge.EmpireOur Empire is crumbling right before my eyes. No one can be trusted for reasons that are consuming me, controlling me and ripping me away from my family.This new family who has taken over the streets of New York has taken someone away from us. We will not let them take anymore. The only way to stop them is to sacrifice one of us.I'm loved.I'm lost. I hate.