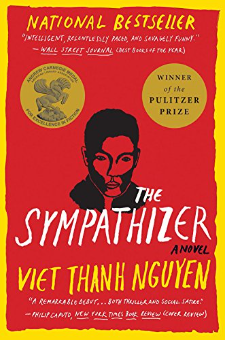 Winner of the 2016 Pulitzer Prize for Fiction Winner of the 2016 Edgar Award for Best First Novel Winner of the 2016 Andrew Carnegie Medal for Excellence in Fiction “[A] remarkable debut novel . . . [Nguyen] brings a distinctive perspective to the war and its aftermath. His book fills a void in the literature, giving voice to the previously voiceless . . . The nameless protagonist-narrator, a memorable character despite his anonymity, is an Americanized Vietnamese with a divided heart and mind. Nguyen’s skill in portraying this sort of ambivalent personality compares favorably with masters like Conrad, Greene, and le Carré. . . . Both thriller and social satire. . . . In its final chapters, The Sympathizer becomes an absurdist tour de force that might have been written by a Kafka or Genet.”—Philip Caputo, New York Times Book Review (cover review) The winner of the 2016 Pulitzer Prize for Fiction, as well as seven other awards, The Sympathizer is the breakthrough novel of the year. With the pace and suspense of a thriller and prose that has been compared to Graham Greene and Saul Bellow, The Sympathizer is a sweeping epic of love and betrayal. The narrator, a communist double agent, is a “man of two minds,” a half-French, half-Vietnamese army captain who arranges to come to America after the Fall of Saigon, and while building a new life with other Vietnamese refugees in Los Angeles is secretly reporting back to his communist superiors in Vietnam. The Sympathizer is a blistering exploration of identity and America, a gripping espionage novel, and a powerful story of love and friendship.