The Swords of Lankhmar 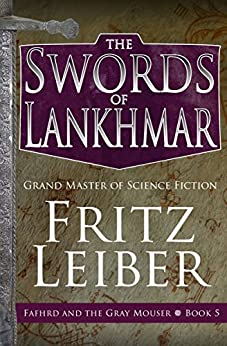 From the Grand Master of Science Fiction, the fifth book in a series that stands as “one of the great works of fantasy in this century” (Publishers Weekly).

The Swords of Lankhmar finds the city characteristically plagued by rats. Fafhrd and the Gray Mouser are in the employ of Glipkerio, the overlord, to guard a grain ship on its journey. Along the way, the rats onboard stage a rebellion and threaten to take the ship until a two-headed sea monster saves the day. If only there were two-headed sea monsters everywhere, Lankhmar would be safe, too. Alas, upon returning to the city, the two discover that Lankhmar is controlled by rats. It is a city known for its thieves and swine, but even the city’s muddiest bottom feeders have never seen pillaging and plundering like this. And only the sorcerers Sheelba of the Eyeless Face and Ningauble of the Seven Eyes can scare this scourge. Mouser must shrink into the rat’s world and Fafhrd must unleash the feared feline War Cats. Then the fun really begins.

Before The Lord of the Rings took the world by storm, Leiber’s fantastic but thoroughly flawed antiheroes, Fafhrd and Gray Mouser, adventured deep within the caves of Inner Earth, albeit a different one. They wondered and wandered to the edges of the Outer Sea, across the Land of Nehwon and throughout every nook and cranny of gothic Lankhmar, Nehwon’s grandest and most mystically corrupt city. Lankhmar is Leiber’s fully realized, vivid incarnation of urban decay and civilization’s corroding effect on the human psyche.

Drawing on themes from Shakespeare, Edgar Allan Poe, and H. P. Lovecraft, master manipulator Fritz Leiber is a worldwide legend within the fantasy genre and actually coined the term Sword and Sorcery that describes the subgenre he helped create.