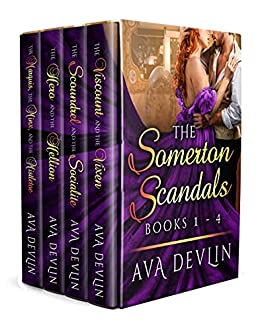 Was ever a family more bedeviled by scandal than House Somers?Jump into a world of sweet and steamy Regency romance. The Somers siblings have lived their lives with a name synonymous for scandal and shame. There's no avoiding the siren's call of the improper and salacious for a Somers. Includes all four novels and a link to claim a free bonus prequel novella.The Viscount and the VixenGideon Somers has worked his entire life to restore his family's reputation. When disaster befalls the family at the behest of his wild hellion of a sister, he has no choice but to marry as quickly as possible and return to the family estate before any more damage can be done. The problem, however, is that his intended is intent on refusing his proposal, and to make matters even worse, her cousin is a woman Gideon has secretly longed for.The Scoundrel and the SocialiteAlex Somers has found himself in a mess of his own making. Mistaken identities and careless revelry have put him into the cross-hairs of dangerous spies. To make matters worse, he is confined to Somerton with the very same people who are after him -- he just doesn't know who they are. With the help of the beautiful and determined Gloriana Blakely, Alex will have to work harder than he ever has if he's to keep his head ... and his heart.The Hero and the HellionHeloise Somers has a secret. The little girl who calls her auntie is actually her daughter, born of a whirlwind summer romance many years prior. When the father of her child returns from war, oblivious to the existence of his daughter, Heloise must grapple with maintaining the illusion she has built. Amid a disaster in the community, Heloise must hold her life together ... try to resist falling into Callum Laughlin's arms once again.The Marquis, the Minx, and the MistletoeSheldon Bywater, Marquis of Moorvale, has always considered himself an honorary member of the Somers family. When he arrives for the annual Yuletide festivities, he is shocked to find an enticing runaway bride asleep in his bed! The two have a history, and while Tatiana resists, Sheldon knows that lightning will strike as many times as necessary until they are together. It is inevitable.