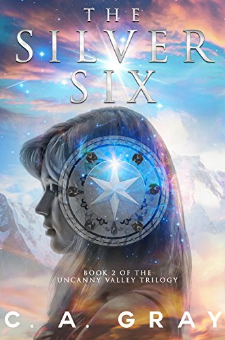 **Dystopian coming-of-age with superintelligent A.I.**What is it that makes us truly human?Rebecca Cordeaux’s entire world has been turned upside down. In a single day, she’s learned that Senate Leader Halpert and his Board of Advisors are actually illegal humanoid robots created underground twenty years ago—and they tried to have her killed. Her mother Karen, whom she always believed to be passionately against the cause of the Renegades, turns out to be their leader. And Liam, a man she never thought she cared for, is now fighting for his life—and she finds that she cares desperately.Fortunately Karen, known to the Renegades as M, has planned for exactly this sort of eventuality. Using Rebecca’s father’s blueprints, Karen patiently built an underground compound in an abandoned part of the Americas where they can regroup and plan for the coming war. The compound becomes an unlikely oasis as their number grows, both on accident and on purpose. In attempting to recover her best friend and companion bot Madeline, Rebecca gets what she thought she’d always wanted: Andy arrives at the compound too, along with her friends Jake and Julie. But with the sudden addition of an old flame from Liam’s past, Rebecca discovers just how little acquainted she has been with her own heart.Meanwhile, the Silver Six are running a worldwide campaign of indoctrination to ensure that the people are on their side. In the name of peace, they want nothing more than to wipe out every shred of resistance, while pursuing their ultimate goal of robotic superintelligence. With the assistance of a neuroscientist who helped to build the Silver Six decades ago, Rebecca attempts to understand how synthetic minds work, hoping this information can be used against them. She’s sure that the mysterious, brilliant, and beautiful Alessandra Russo is the key somehow, but Alex’s hatred for the Silver Six is only matched by her hatred for the Renegades. Can the Renegades find and exploit the weakness of the Silver Six before synthetic intelligence passes the point of no return?