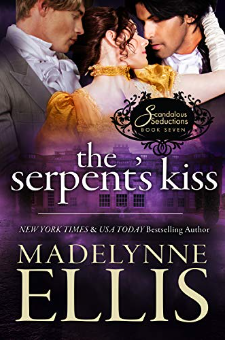 She’s the disgrace of the county…Bella Rushdale has returned home still unwed having eloped with Viscount Marlinscar, and she’s now engaged in a scandalous liaison with the Marquis of Pennerley. Remote Yorkshire society is outraged! Something ought to be done. Even the untrained observer can see there’s something deliciously perplexing about the relationship between Bella and the two rascals responsible for her disgrace. As rumours of unnatural activities, forbidden pleasures and the inevitable repercussions abound, Bella vigorously resists her brother’s attempts to strong-arm her into wedlock. But, all too soon everything gets out of hand, putting Bella at risk of losing far more than her reputation. Can three people whose lives and hearts are so inexorably bound forge a lasting bond? Or is their love as ill-fated as society would have them believe?The Serpent’s Kiss is a Regency-set historical romance with a high heat including M/F, M/M and M/M/F interactions. Those of a timid or nervous disposition are advised against indulging.Don’t miss any of the enthralling Scandalous Seductions series:A GENTLEMAN’S WAGER | INDISCRETIONS | PHANTASMAGORIA | THREE TIMES THE SCANDAL | HER HUSBAND’S LOVER | THE GHOST OF CHRISTMAS PAST | THE SERPENT’S KISSAnd look out for the equally enticing Forbidden Loves series by Madelynne Ellis:THE KISSING BOUGH | PURE FOLLY