The Secret Sister & The Secrets She Kept 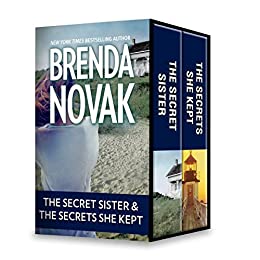 See why critics have called these two books by New York Times bestselling author Brenda “the best romantic thriller I’ve ever read” (The San Francisco Book Review on The Secret Sister) and a “richly rewarding story” (Booklist on The Secrets She Kept).

After a painful divorce, Maisey Lazarow returns to Fairham, the small island off the South Carolina coast where she grew up. But the last person she wants to see is the wealthy, controlling mother she escaped years ago. She finds herself living next door to someone else she’d prefer to avoid—Rafe Romero, the wild, reckless boy to whom she lost her virginity at sixteen. He’s back on the island, and to her surprise, he’s raising a young daughter alone. Maisey’s still attracted to him, but her heart’s too broken to risk…

Then something even more disturbing happens. She discovers a box of photographs that evoke distant memories of a little girl. Maisey believes the girl must’ve been her sister, but her mother claims there was no sister.

She’s convinced that child existed. So where is she now?

The Secrets She Kept

The rich and powerful Josephine Lazarow, matriarch of Fairham Island, is dead. The police say it’s suicide, but Keith, her estranged son, doesn’t believe it.

Keith bears scars—both physical and emotional—from his childhood, but he’s worked hard to overcome the past. But he feels he owes it to his grandfather to put the family empire together again—and he’s determined to find his mother’s killer.

Problem is…coming home to Fairham puts him back in contact with Nancy Dellinger, the woman he hurt so badly when he left before. And digging that deep into his mother’s final days and hours entails a very real risk. Because the person who killed her could be someone he loves…