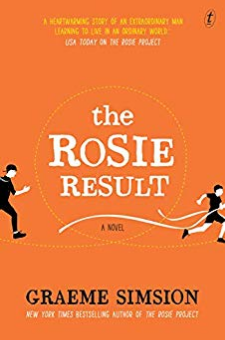 I was standing on one leg shucking oysters when the problems began… Don Tillman and Rosie Jarman are about to face their most important challenge. Their ten-year-old son, Hudson, is struggling at school: he’s socially awkward and not fitting in. Don’s spent a lifetime trying to fit in—so who better to teach Hudson the skills he needs? The Hudson Project will require the help of friends old and new, force Don to decide how much to guide Hudson and how much to let him be himself, and raise some significant questions about Don’s own identity. Meanwhile, there are multiple distractions to deal with: the Genetics Lecture Outrage, Rosie’s troubles at work, estrangement from his best friend Gene… And opening the world’s best cocktail bar. Hilarious and thought-provoking, with a brilliant cast of characters, The Rosie Result is the triumphant final instalment of the much-loved and internationally bestselling Don Tillman trilogy. Graeme Simsion is a Melbourne-based novelist and screenwriter. The Rosie Project and The Rosie Effect have combined global sales approaching five million copies. Graeme is also the author of the international bestsellers The Best of Adam Sharp and – co-written with his wife, Anne Buist – Two Steps Forward. His screenplay for The Rosie Project is in development with Sony Pictures, The Best of Adam Sharp is in development with Toni Collette’s Vocab Films, and the rights to Two Steps Forward have been optioned by Fox Searchlight and Ellen DeGeneres. Graeme’s latest book is the third and final Don Tillman novel, The Rosie Result. “Bursting with warmth, emotional depth, and…humor,” Entertainment Weekly “Don Tillman helps us believe in possibility, makes us proud to be human beings, and the bonus is this: he keeps us laughing like hell” Matthew Quick, author of The Silver Linings Playbook. “A heartwarming story of an extraordinary man learning to live in an ordinary world.’” USA Today "Sharp dialogue, terrific pacing, physical hijinks, slapstick, a couple to root for, and more twists than a pack of Twizzlers.” NPR.org "Filled with humor and plenty of heart... a delightful reminder that all of us, no matter how we're wired, just want to fit in." Chicago Tribune "One of the year's most promising and original novelists." Wall Street Journal ‘Charming, eloquent, and insightful, The Rosie Result is a triumphant conclusion to Don’s story, one that celebrates this remarkable father, husband, and friend in all his complexity and brilliance.’ Booklist (starred review)  ‘Very much a charmer...A fitting end to this delightful trilogy that doesn't pull punches.’ Kirkus