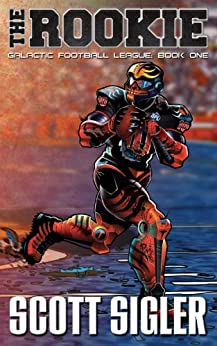 Linebackers That Literally Want to Eat You“THE ROOKIE is a wild ride that takes football to the next level. Set in a future day of corruption, bigger bodies and bigger stakes, it’s Rollerball between the white lines and a fascinating read.” — John Clayton, ESPN NFL AnalystSet in a lethal pro football league 700 years in the future, THE ROOKIE is a story that combines the intense gridiron action of "Any Given Sunday" with the space opera style of "Star Wars" and the criminal underworld of "The Godfather." Aliens and humans alike play positions based on physiology, creating receivers that jump 25 feet into the air, linemen that bench-press 1,200 pounds, and linebackers that literally want to eat you. Organized crime runs every franchise, games are fixed and rival players are assassinated. Follow the story of Quentin Barnes, a 19-year-old quarterback prodigy that has been raised all his life to hate, and kill, those aliens. Quentin must deal with his racism and learn to lead, or he'll wind up just another stat in the column marked "killed on the field."Galactic Football League (GFL) Series:THE ROOKIE • THE STARTER • THE ALL-PRO • THE MVP • THE CHAMPION