The Rise of the River-Man 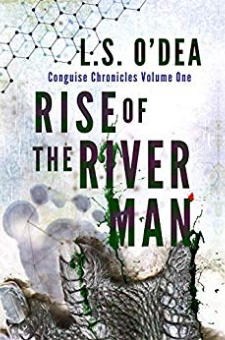 If you like short, disturbing stories similar to the Twilight Zone and Tales from the Crypt, then you'll love this series.Welcome to the Conguise’s Laboratory Level Five....In a world filled with human-animal hybrids, Guards are bred to serve the Almightys until they’re no longer wanted.Mutter waits for his execution. It’s inevitable. He was a fighter and he lost. No one wants an ex-fighter. He’s too big, mean and ugly. Death will be the only way he gets out of this cell, but then the unthinkable happens. An Almighty visits in the dead of night and offers him a chance to leave. A chance to live.All he has to do is obey and Guards were bred to obey. When Mutter is taken to his new home, something isn’t right. There’s food and a bed but there are sounds and smells from the other cages. Things that move like nothing he’s ever encountered.For the first time in his life, he’s afraid. Afraid of the creatures that lurk nearby. Afraid of the shots his new master is giving him.He knows he’s supposed to obey, to always follow their rules but if he doesn’t escape, he’ll become food for one of those things in the other cages. Or worse... turn into one of them."A fascinating glimpse into the world of the Lake of Sins." J. Urbanczyk Interview with the AuthorQ. – So, why should someone read the Conguise Chronicles series?Well, because it’s great (smiles). No, seriously. If you’re looking for your typical horror novel with classic vampires, witches, demons or werewolves then you should look somewhere else. This story turns your standard supernatural thrillers upside down. You'll root for the monster, not the humans.The characters in the series are human-animal hybrids. They’ve been captured and are being genetically modified by a genius who hasn't quite figured out how to control his experiments or his monsters. Conguise Chronicles takes place in the world of the Lake of Sins—a world which is segregated by class and the descendants of humans rule supreme. Each story in this series explores the life of one genetic mutation who you meet in the Lake of Sins series. The books are fast paced with adventure, danger and madness around every corner. I guarantee by the end, you’ll be rooting for the monster and you'll never read another horror story without thinking about things from the creature's perspective.All-in-all, it’s a unique and exciting read and you should give it a try. I think you’ll love it.Q. – Who should read the Conguise Chronicles series?The audience for this series is broad. I have fans (male and female) aged ten through eighty. Anyone who likes gory thrillers that are dark, a little disturbing and packed with action will enjoy these books. If you like Relic, Frankenstein and The Island of Dr. Moreau, then you’ll enjoy these tales.However, a word of caution is in order. These books are not for the squeamish. Some scenes are bloody and violent, but the interactions between the characters are funny, poignant and loving. Still, I wouldn’t recommend these books to anyone under thirteen without the parents reading the books first.If you enjoy this book, you should check out the parent series (Lake of Sins). The first book is free.The Lake of Sins Series should be read in the following order:Lake of Sins: Escape (book 1) (free for a limited time)Lake of Sins: Secrets In Blood (book 2)Lake of Sins: Hangman’s Army (book 3)Lake of Sins: Betrayed (book 4)Lake of Sins: Whispers from the PastI don’t have the titles for the others in the series yet.