The Reinvention of Mimi Finnegan 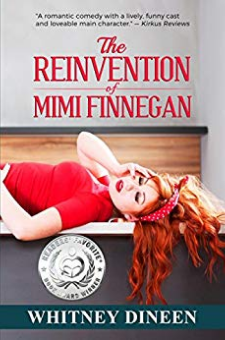 "Whitney Dineen has a brilliant sense of humour herself which shines forth in her writing...Watch out Bridget Jones, Mimi Finnegan is on your tail!" -Readers' FavoriteSilver Medal Winner at the 2016 International Readers' Favorite Awards.Thirty-four year old, Mimi Finnegan, is the third of four daughters and in her eyes, by far, the most unremarkable. She has no singular accomplishment that can stand up to any of her sisters. And if that isn’t enough, she is the only single sibling in her family.Mimi’s sisters decide that it’s time she gets serious about husband hunting, so they begin a campaign to find Mr. Right. Considering her most recent dating encounters include a night club owner who stuffs bratwurst in his pants and a WASPy trust fund baby, living happily under his mother’s thumb, Mimi is more than ready to meet THE ONE. Enter celebrated British novelist, Elliot Fielding.Sexual tension and anger heat up between the duo and it isn’t until Mimi discovers that Elliot is almost engaged to another that she realizes she is head-over-heels in love with him.The journey will make you laugh, cry and want to pull your hair out from frustration! Mimi eventually learns she is quite remarkable in her own right and never needed to worry she lived in her sisters shadows.The Reinvention of Mimi Finnegan is the perfect laugh-out-loud, feel good book for any woman who has ever felt that she wasn’t good enough.