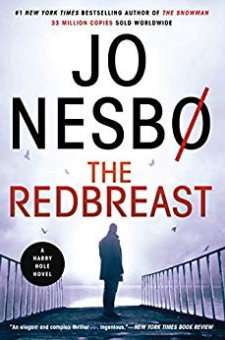 “An elegant and complex thriller….Harrowingly beautiful.”—New York Times Book Review“A hugely impressive achievement—ambitious in scope, and skilled in execution.”—Los Angeles Times“The Redbreast certainly ranks with the best of current American crime fiction.”—Washington PostNo disrespect meant to Henning Mankell and Stieg Larsson, but Jo Nesbø, the New York Times bestselling author of The Snowman, is the most exciting Scandinavian thriller writer in the crime fiction business. The Redbreast is a fabulous installment in Nesbø’s tough-as-nails series protagonist, Oslo police detective Harry Hole. A brilliant and epic novel, breathtaking in its scope and design—winner of The Glass Key for best Nordic crime novel and selected as the best Norwegian crime novel ever written by members of Norway’s book clubs—The Redbreast is a chilling tale of murder and betrayal that ranges from the battlefields of World War Two to the streets of modern-day Oslo. Follow Hole as he races to stop a killer and disarm a ticking time-bomb from his nation’s shadowy past. Vogue magazine says that “nobody can delve into the dark, twisted mind of a murderer better than a Scandinavian thriller writer”…and nobody does it better than Jo Nesbø! James Patterson fans should also take note.