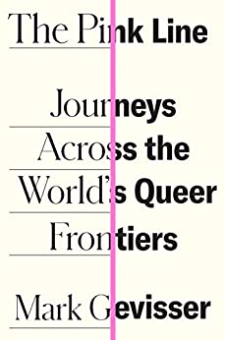 One of TIME's 100 Must-Read Books of 2020. Longlisted for the 2021 Rathbones Folio Prize. "[Mark] Gevisser is clear-eyed and wise enough to have a sharp sense of how tough the struggle has been, and how hard it will be now for those who have not succeeded in finding shelter from prejudice." --Colm Tóibín, The GuardianA groundbreaking look at how the issues of sexuality and gender identity divide and unite the world todayMore than seven years in the making, Mark Gevisser’s The Pink Line: Journeys Across the World’s Queer Frontiers is an exploration of how the conversation around sexual orientation and gender identity has come to divide—and describe—the world in an entirely new way over the first two decades of the twenty-first century. No social movement has brought change so quickly and with such dramatically mixed results. While same-sex marriage and gender transition are celebrated in some parts of the world, laws are being strengthened to criminalize homosexuality and gender nonconformity in others. As new globalized queer identities are adopted by people across the world—thanks to the digital revolution—fresh culture wars have emerged. A new Pink Line, Gevisser argues, has been drawn across the globe, and he takes readers to its frontiers.Between sensitive and sometimes startling profiles of the queer folk he’s encountered along the Pink Line, Gevisser offers sharp analytical chapters exploring identity politics, religion, gender ideology, capitalism, human rights, moral panics, geopolitics, and what he calls “the new transgender culture wars.” His subjects include a Ugandan refugee in flight to Canada, a trans woman fighting for custody of her child in Moscow, a lesbian couple campaigning for marriage equality in Mexico, genderqueer high schoolers coming of age in Michigan, a gay Israeli-Palestinian couple searching for common ground, and a community of kothis—“women’s hearts in men’s bodies”—who run a temple in an Indian fishing village. What results is a moving and multifaceted picture of the world today, and the queer people defining it.Eye-opening, heartfelt, expertly researched, and compellingly narrated, The Pink Line is a monumental—and urgent—journey of unprecedented scope into twenty-first-century identity, seen through the border posts along the world’s new LGBTQ+ frontiers.